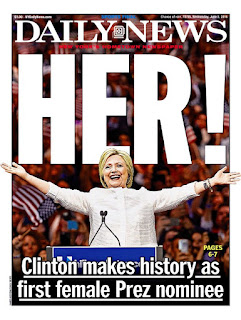 On Tuesday, 26 July 2016, a major political party nominated a candidate for the office of president of the United States who does not have a penis.

No, not Catelyn Jenner.  She didn't cut it off; she wasn't born with one.  The nominee, Hillary Rodham (maybe should be Rodless?) Clinton is biologically, chromosomally female.  She birthed a baby, which dispels any doubt. Someday, MtoF transsexuals will undoubtedly have that ability, but the technology isn't there yet, despite the weird shit you read on the Internet.

Oh, wait, that makes it worse?  You're afraid of anyone with PMS having access to the nuclear codes?  She's a post-menopausal grandmother now, so I think you can rest easy on that score.

So, this is a historic moment.  There was also a historic moment 8 years ago when the same party nominated the first black presidential candidate.  (He won, BTW.)  Note that I said "the same party".  The other party just nominated a megalomaniac narcissist & a troglodyte fundie who thinks the earth is 6,000 years old.  That party nominated a woman for VP in 2008 you say?  Well, the Democrats did that back in 1984.  &--bonus—she wasn't dumber than a lump of moose poop.
Speaking of dates, the 19th Amendment establishing the right of all American women to vote was ratified on August 18, 1920.  Now, Barbie tells us that "math is hard" for girls, but even I can figure out that was nearly a 100 fucking years ago.

We have waited too fucking long for this.  Oh, do I cuss too much for a lady?  Too damn bad.

This is important.  This is history in the making. Whatever your policy views or your party affiliation, you need to appreciate this & remember how hard your mothers, grandmothers, great-grandmothers, & great-great grandmothers fought for this day.

When my grandmother was born, women could not vote for president, let alone be considered as viable candidates for that office.  The first woman was elected to the House in 1916, but we had to wait until 1932 for the first female Senator, and 1933 for the first female presidential cabinet appointee (Secretary of Labour).

When my mother was growing up, women were still required to quit many jobs when they married or had children, and they couldn't get a loan or credit without a man's signature.  It's not so very long ago that women took their husbands' name when they married because they went from being their father's legal property to their husband's property.  I remember, as a small child, being confused when I saw a clipping of a letter my grandmother had written to the local paper.  It was signed "Mrs." followed by my grandfather's full name.  Puzzled, I asked her why she hadn't signed her name, & she seemed equally puzzled by the question.  Her identity in the world was as a married woman; she was nobody on her own, without a husband's name behind her thoughts, her words.  Remember when Bill was first running for president and Hillary Rodham had to start using "Clinton" to placate the conservatives?  I wonder how my grandmother would react to the potential First Gentleman's speech, hearing him sing his wife's praises as the most qualified candidate to lead the richest, most powerful nation on earth.  Not because she is "Mrs. William Jefferson Clinton" but because of her own education, hard work, and accomplishments.  I like to think my grandma would be thrilled--and equally happy to have a granddaughter who will never, under any circumstances, take a man's name.

We still have a long way to go for women to achieve full social, legal, and economic equality, but this nomination is a major step in the right direction. 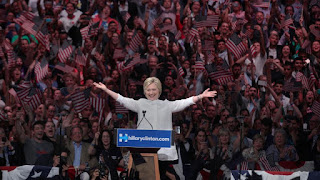