"Let's Not Start Sucking Each Other's Dicks Quite Yet"

Ok, fratboy Eddie Munster is probably too homophobic to refer to blowing another guy even as a joke but he's behind on his Koch-sucking and his sugar daddies aren't happy.  Americans For Prosperity (a.k.a. IGMFY) announced that "the piggy bank is closed" until they see some motherfucking tax cuts.  I mean, they paid good money for them and they've got two out of three branches (and they've already stolen a seat in the third—they'll have the whole enchilada if Ginsburg's health fails), so what's the delay?  The Rethugs can't complain that Dems are thwarting their nefarious plans, so why didn't they ram through their whole tax-and-reg cutting agenda in the first 100 days?  Could it be that some Rethugs might….gosh, dare we even say it….have a heart?  Or a modicum of reason?

Alas, no.  Turns out the delay on the Trumpcare vote is mostly due to Senators who think it's too generous.  They want healthcare to be left entirely to the market, with no government involvement whatsoever.  See Ron Johnson's staggeringly stupid Op-Ed in the New York Times.  Read the comments whilst you are there.  The piece is so devoid of basic logic and rudimentary sense that the cheesehead Senator's ass was deservedly handed to him by nearly 2,000 commenters.  It is a satisfying takedown but a bit like shooting fish in a barrel.  The question I always have with fucktards like this moron, and the religionists as well, is do they actually believe their own drivel?  I mean, are they peddling it knowingly for their ignorant voters to swallow or are they braindead enough to actually believe it?  They're supposed to just spoonfeed it to the gullible masses, not swallow it themselves, but sometimes I wonder how they can sell it with a straight face if they don't buy it.  Lasik as an example of why all healthcare could be left to market forces?  If Johnson doesn't see the absurdity of that comparison, how does he tie his shoelaces in the morning, let alone get elected to public office?  Peristalsis must be a significant mental challenge for him. 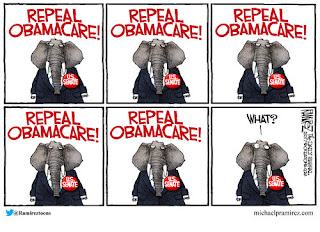 To be fair, there is some opposition from GOP moderates as well.  A few Senators are concerned that taking healthcare away from too many of their constituents might hurt their re-election bids.  After all, 64% of nursing home residents, 49% of births (yep, nearly half of total births in the entire country), and 39% of children are on Medicaid and the vast majority are in red states.  But they needn't worry:  Poor red state voters elected them in the first place and they aren't going to suddenly stop voting against their own interests.  If they were gullible enough to think Cheetolini had their backs, they won't realise that Ryan telling them that his plan will give all Americans "choice" and "freedom" and "access" to care means the unsaid, "if you can afford it."  People tend to listen to what is said and latch onto words that sound good to them rather than shrewdly noting what is not said.  Rand Paul remains the staunchest opponent of the current bill because it isn't libertarian enough for him yet he comes from a state that was one of Obamacare's greatest successes.  Kentucky's uninsured rate was over 20% in 2013 before Obamacare and dropped to around 7%, with about 80,000 people obtaining individual subsidized policies and 420,000 new Medicaid enrolees.  When a Republican governor roared into office on a campaign promise to dismantle Obamacare in his state, he found that his voters' vocal support of that idea was at odds with their dependence on the ACA.  Some of the voters most in favour of repealing Obamacare had insurance because of it but were, mystifyingly, unaware of the connection.  So, he mostly settled for re-branding to make it more palatable to Rethugs.

You have to feel sorry for the Senate. They almost won their bet with the House that they could take healthcare away from more people but they came up one million short on the CBO score: 22 million vs. 23 million for the House bill.  When Ryan was confronted with the number, he tried to spin it that no-one would be thrown off, they would just be choosing not to buy coverage once the individual mandate was eliminated.  As this NY magazine piece recognises, most of the people losing coverage are on Medicaid, not the ones buying insurance, and Ryan had claimed that the Rethug successor to Obamacare would offer lower cost and better policies that people would want to buy. 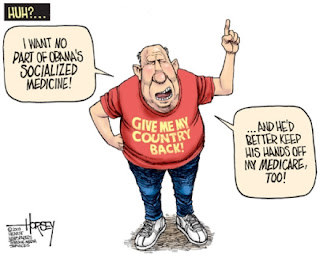 But this bill isn't about healthcare; it's about tax cuts.  The Rethugs have two goals: 1) Gut Medicaid to facilitate massive tax cuts; 2) End government subsidies to buy private insurance to enable more tax cuts.  Tax cuts are really popular, so that bit is an easy sell.  The trick is to spin the resulting loss of healthcare access as encouraging "personal responsibility" and "freedom from government dependence."  To make that work, you have to paint everyone who can't afford healthcare without government assistance as undeserving, whether due to laziness or an unhealthy lifestyle.  Affording healthcare must be seen as in their power if only they had a better work ethic.  Given the myth of the American dream, mentioned in my previous post on healthcare, it's usually simple to get Rethug voters to throw the poor under the bus to justify tax cuts.  They just have to lie a little more baldly when it comes to healthcare because most Americans cannot afford to pay for it, not just those at the very bottom of the income spectrum.  Thus, they can't quite spin it like welfare or foodstamps; they have to pretend that they are actually making healthcare more accessible and affordable for more people rather than admit they are doing the exact opposite.  The reason that the vote was postponed today, the reason the Rethugs have failed to implement their agenda despite having complete control of the government, is simply the fear that some Congressmen have about not getting re-elected if their constituents ever begin to notice the yawning gap between their rhetoric and reality.  In almost no other policy area is the evidence that Rethug voters are voting against their own interests more obvious.  As I said above, I don't think they need have any fears on that score, but it looks like enough of them are worried to prevent Obamacare from being repealed, despite its being their main campaign promise in the 2016 election.

Also note that most of the provisions in their bill to reduce healthcare access don't go into effect for years—a decade from now, in some cases.  That timeline gives them the ability to tell their donors that they did their bidding whilst at the same time preventing an immediate electoral backlash.  Smarmy, but effective.  Getting inside the head of a Rethug makes you want to wash your brain out with soap.

When the voting delay was announced, I was in my local Barnes & Noble picking up a copy of New York Magazine, which I usually read online but I wanted a hardcopy of the current issue.  Some people in the café were talking about the individual mandate and risk pooling.  I overheard someone say, "The way to get people to buy insurance is to end medical bankruptcy."  Their conversation moved on and I bit my tongue but, Jesus bloody fuckballs.  I live in a notoriously liberal area—one local town has its own foreign policy, another is the lesbian capital of the known universe.  I'm kind of staggered that someone around here would propose something so terrible that even Mitch McTurtle might consider it beyond the pale. 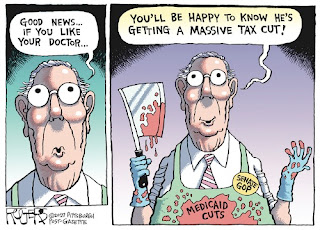 As I noted in my last blog post, most medical bankruptcies are filed by people who have insurance, and people who could afford to buy insurance but choose not to are a vanishingly small minority, in the same mythical Rethug fairytale as those avocado toast-eating SNAP-ers.  Besides, Rethugs believe that no-one should be forced to buy insurance so they should approve of those Americans who choose not to purchase it then use bankruptcy to get out of paying their medical bills.  "That makes me smart", right guys?
Posted by Piranha Chicken at 01:59