Meet Kyle, Dumbass of the Week

In case you've been living in a cave with no WiFi, let me introduce you to Kyle.  At midnight (better known as save-in-draft-mode-until-morning-o'clock) on Thursday, Kyle decided that the world needed to hear these words of manly wisdom: 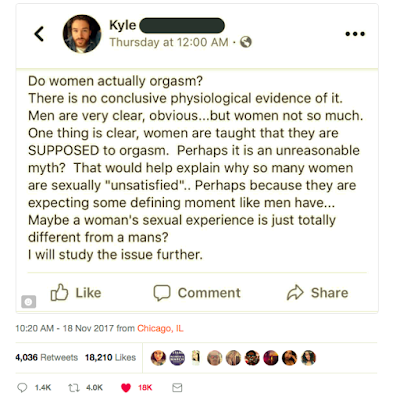 Kyle personifies 2017.  Kyle has never seen a female orgasm so, instead of asking women about it, he mansplains that female orgasms must not exist.  Social media now guarantees he will never see one—by noon on Thursday, Kyle's asinine, patronising post had gone viral.  In football (soccer) they call this an "own goal." 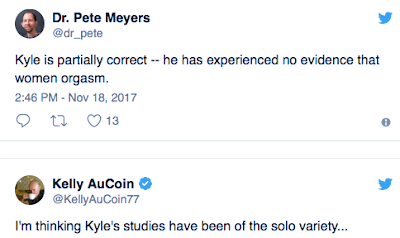 Yes, instead of asking women about the female orgasm, he tells women they're a myth. Instead of considering that women might know more about our sexual experience than he does, he says we are wrong not to be sexually satisfied sans orgasms.  I can't wait for his next post telling us we should be satisfied as helpmeets without education and careers. 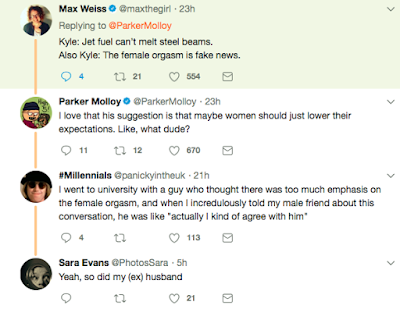 Even if chauvinist Kyle refused to believe women about their own orgasms, a quick Google search would have informed him that male researchers have documented the physiology of the female orgasm. But he couldn’t be bothered because clearly his own research on the subject is definitive, and finding evidence that the female orgasm exists would mean facing what a loser he is in bed. I guarantee that Kyle has never fucked the same woman twice. No woman makes that mistake more than once.  One commenter noted that apparently Kyle hasn't even had a woman bother to fake an orgasm Katz's Delicatessen style, implying he made so little effort that no one ever felt obliged to spare his feelings or give him some credit for the attempt. 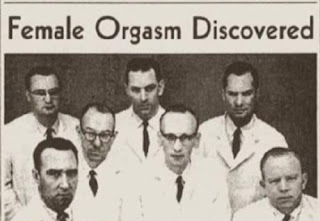 Kyle's post is such an obvious indictment of his own skill that one can't but wonder if he is trolling.  Who in their right mind would advertise, using his real name and photo, on a worldwide public billboard, "I AM TERRIBLE IN BED."  To be fair, it was midnight, and we don't know what he was drinking/smoking, or if his roommate hacked his account.  His post is reminiscent of Ryan Williams, the 19-year-old British assclown who, just over a year ago, tweeted "If a woman ‘cannot hold in her period until she gets to a toilet’ then it is her problem, not the taxpayer’s.”  Last fall, the UK was considering removing the VAT (sales tax to Americans) on feminine hygiene products because they are a necessity.  Three weeks later, after what he claimed were "death threats from feminists," he said his Tweetastrophe had been a hoax. 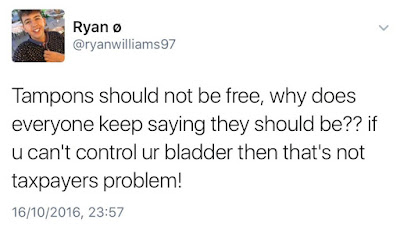 Ryan initially invoked a tiny amount of sympathy from people who thought he was ignorant due to poor education rather than assholery, but Kyle has no such excuse.  He richly deserved the unlubricated public ass-reaming he received.  Unless he is currently incarcerated in a maximum security single sex prison, in which case he would not have access to the internet, he could have simply asked a woman.  Heck, even in Supermax, his fellow inmates would have told him he was full of shit.

Those of us who had the luxury of misspending our youth before the internet but after the sexual revolution reached sexual maturity at a time when women expected to both give and receive sexual pleasure.  From the time of our first awkward kiss onward, we never got our boyfriends off without extracting quid pro quo orgasms.  Even the most fumbling, bumbling 80s teenage boy understood that pleasing his partner was non-negotiable. 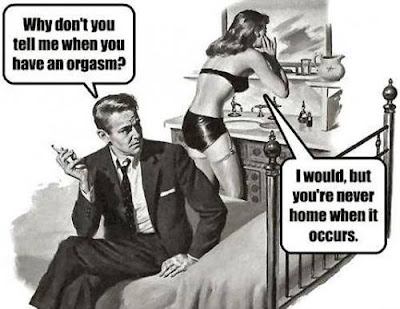 Consent is now emphasized on college campuses because the old double-standard survives in uneasy juxtaposition to hook-up culture.  Women can have casual sex like men but they can't want it—they can't have sexual agency.  It's the tired, old Madonna/whore complex but updated for the 21st century: Women aren't expected to be chaste—then they are harangued as prudes and of no interest/use to men—they just aren't expected to like or want sex themselves.  College sex looks a lot like rape: Men initiate it and order women into the porn star contortions they've grown up watching.  Young women comply but they are not saying "yes," they're just not saying "no."  Depressingly, studies of high school and college women show that the idea that they should get something out of the experience never crosses their minds.  Women over and under 40 give starkly different answers to the question, "Do you expect to have an orgasm during sex?"  For younger women, sex seems to be more about pleasing the man than reciprocal.  I'd like to think that as women have made progress towards economic and social equality that progress would manifest in the bedroom but the reverse seems to be happening. 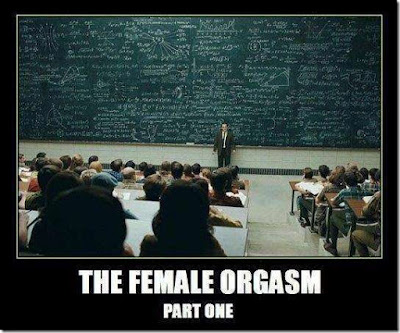 Although the female orgasm indisputably exists, it usually takes more time, effort, skill, and communication to bring off than the male version.  There are doubtless evolutionary reasons for this—the biological purpose of female orgasm is still hotly debated.  (Alas for that brief era of medieval history when it was thought to be as necessary as the male orgasm for conception.)  In today's Tinder-driven hook-up culture, couples sometimes don't copulate more than once and it can take some practice together before even the most willing and considerate man learns how to get his woman off.

Kyle's mansplaining chauvinism indicates that he assumes sex is all about him:  In his mind, women should be satisfied with being desired but not experience desire ourselves.  We should be happy to settle for letting the Kyles of the world get off any way they choose to use our bodies and not expect any more from sex.  Kyle's attitude fits perfectly into the culture that produced Todd Akin, the Missouri Rep. who thinks women can't get pregnant from rape, and the growing list of rich and powerful men whose history of viewing women as objects without independent agency is coming to light.  And let's not forget the pussy-grabber-in-chief, who famously said on the Howard Stern show that "I couldn't care less" if the women he slept with got any pleasure.  You're in great company, Kyle.  Go fuck yourself.

Posted by Piranha Chicken at 01:19