Crescat scientia; vita excolatur: U of C tells students where they can stick their safe spaces

It's that time of year, when helicopter parents alight on college campuses to deposit their precious snowflakes into a carefully-structured-and-scripted environment free of critical thinking, analytical debate, and intellectual rigour.  (Judging from my local state school, sex, drugs, and rock 'n' roll are apparently still okay, though.)  Institutions around the country have bent over backwards to enact speech codes in response to student demands to ensure that their college education is free of any words and ideas that might hurt their widdle feelings and/or make them feel 'uncomfortable'.  So, it was a pleasant surprise this morning to see that, in a move sure to get the knickers of every SJW in a twist, the University of Chicago sent the following letter to incoming freshmen.  Go ahead and read the whole thing.  I'll wait.
Take particular note of this:

"You will find that we expect members of our community to be engaged in rigorous debate, discussion, and even disagreement.  At times this may challenge you and even cause discomfort."

"Our commitment to academic freedom means that we do not support so-called “trigger warnings,” we do not cancel invited speakers because their topics might prove controversial, and we do not condone the creation of intellectual “safe spaces” where individuals can retreat from ideas and perspectives at odds with their own."

The letter links to a report of the Committee on Freedom of Expression, which includes this statement:

“It is not the proper role of the University to attempt to shield individuals from ideas and opinions they find unwelcome, disagreeable, or even deeply offensive.  Although the University greatly values civility, and although all members of the University community share in the responsibility for maintaining a climate of mutual respect, concerns about civility and mutual respect can never be used as a justification for closing off discussion of ideas, however offensive or disagreeable those ideas may be to some members of our community.”  (Emphasis added.) 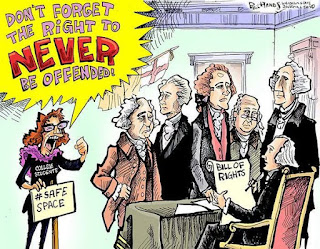 Speech codes, in case you haven't been following the reductio ad absurdum of academic censorship, and their bastard offspring, trigger warnings and safe spaces, restrict speech that would be protected by the First Amendment outside of campus.  Public colleges and universities are prohibited from enacting unconstitutional restrictions on campus speech, although many of them remain blissfully oblivious to their illegality and do so anyway.  Private schools are free to do as they choose, although, as institutions of higher education, they have an inherent obligation to embrace and encourage the free exchange of ideas.

It should be prima facie obvious that all of these forms of censorship are antithetical to a free society, let alone a place of higher learning.  Speech control is tantamount to thought control.  The belief that these protections are warranted follows, in some cases, from a viewpoint that college isn't the real world:  College students may no longer be caterpillars but they are not yet butterflies and they need protection in this delicate chrysalis stage in order to be able to eventually spread their wings.  It's true that college is a unique transitional stage but fashioning it into a solipsistic cocoon is hardly preparation for the real world.  If students are so sensitive that they cannot learn outside of a safe space replete with trigger warnings and stripped of all inadvertent microaggressions, what the hell are they going to do when they graduate? 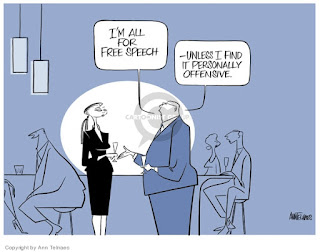 Even scarier, in other cases, justification for campus censorship lies in a fundamental lack of understanding of the value of free speech and the dangers of viewpoint discrimination.  We all agree that racism is wrong, the thinking goes, and racial minorities have suffered long enough, so by prohibiting any expression that may be interpreted as racist, whether intended that way or not, we are simply ensuring that minority students are shielded from any vestiges of racism that remain in the unenlightened.  We are taking our duty to provide education seriously: We are teaching students what they are allowed to think, just like in the USSR, Maoist China, and madrassas.  Oh, wait…..

You thought schools were supposed to teach students how to think not what to think?  Yeah, you are a little behind the times.  Wake up and smell the Fair Trade decaf and don't be late for your course on how The Vagina Monologues is insensitive to transgender women.

So, seeing U of C buck the trend and stand up for free expression on college campuses made my day.  Hell, it might even have restored my faith in humanity.  But let's not get carried away – we still have to get through the election.
Posted by Piranha Chicken at 11:00