Noting a minor milestone, because life is fleeting 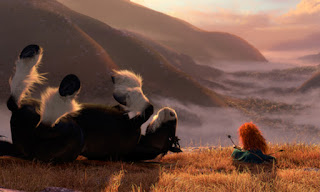 Ever hear a new song you love so much you can't stop singing it even in bed so you can't sleep because you can't get it out of your head?  I had the rare pleasure of stumbling on such a song yesterday and have been on a high since.

I made use of that today.  City Boy texted me out of the blue to ask me to ride his horse.  Now, I haven't seen him since November, when he was such an appalling arsehole that I was quite happy never to endure his infantile presence again.  I did see him through a window once since, but that doesn't really count:  In July, City Friend gave a reading from her new novel at a bookstore that was unfortunately located a few doors down from City Boy's fencing salle.  As I walked to and from my car, I could see him sitting at his computer, though he never looked up and I sure as hell didn't wave.   Following the reading, we were invited to a nearby bar.  We wanted something non-alcoholic as it was sweltering, we were dehydrated, and we hadn't eaten, so we ordered ginger beer.  After a bit, City Friend said, "Do you feel funny?"  I didn't.  A few minutes later, it hit me.  I asked the barmaid if there was alcohol in the ginger beer.  She said yes, it was a regional variety that was very alcoholic.  I'd never encountered alcoholic ginger beer, not to be confused with the local delicacy Ginger Libation, which you must try if you haven't (go for the cranberry), and neither had City Friend.  I was so thirsty I had nearly finished mine before this discovery.  City Friend, busy being plied with questions about her book, was not even halfway into hers.  We decided she was in better shape to drive home.  I relate this story because not even in this state was I remotely tempted to tap on the window.

City Boy has an arrangement with our trainer to get a reduction in the board he pays for his horse, Bishop, if he allows her to use him for lessons.  Post break-up it was made clear to him that if he tried to dictate that I couldn't ride Bishop, trainer would rip him a new one – and he's already a big enough asshole that he doesn't need a second.  But he did order me not to ride Bishop outside of lessons – he had installed his new Ego Boost in my place and that was her prerogative now.  But the Ego Boost, as predicted, dumped him after six months, and trainer has taken every opportunity to inform him how good it is for Bishop's development for me to ride him.  He resents this, of course, and she says the same about the Ego Boost, who still rides Bishop as well.  Yes, he now has two exes riding and training his horse for him.

Trainer has been unavailable for lessons most of the summer so it has been frustrating as, being unemployed, I finally have time to ride.  City Boy initially enquired if I had a lesson today and I replied with a rant about trainer's absence.  He then said he was going to do some groundwork with Bishop and I could ride after.  When I showed up for the hand-off, he was uncharacteristically subdued.  He offered to hold Bishop whilst I mounted and to adjust my stirrups.  He said I could ride Bishop whenever I wanted.  He asked if I wanted him to wait whilst I rode as the farm was deserted.  I said no; he left.

There was no emotional fall-out from this meeting.  Looking at him, it was impossible to believe we'd shared a bed for 13 years.  I felt nothing.  I've been through so much dealing with the detritus of that relationship in the last year, in therapy and otherwise, I'm not sure what there is left to feel.

That gave me the mental space to deal with my other issue: fear.  I've ridden since I was a kid, and I did some stupid stuff back then (not that you notice the dain bramage), but my confidence waned as my sense of mortality grew, and my confidence was finally and completely shattered in a bad fall seven years ago, around my 40th birthday.  I fractured my pelvis in three places but it was not the injury per se that haunted me; it was the nature of the fall, from a spook that not a single member of the USET could have sat.  You know those old cartoons where a character goes off a cliff and is sitting there for a few seconds in mid-air, oblivious to his plight?  That was me.  One minute we were trotting sedately across the ring, next I was hanging in mid-air wondering which body part was going to hit the ground first and how much it was going to hurt.  It felt like I had a really long time to think about this.  I swear, my horse was back in the barn, in her stall, before I touched the ground.  It's funny, we spend so much time training horses to do lateral work, and they resist, maintaining that it is just too difficult to move sideways.  But one scary noise and you get some impromptu Olympic-level lateral moves.  Too bad we can't video these to show the horse later, "See, don't tell me you can't do a side pass!"

That fall occurred when I was going downhill in a bleak period of my life and I lost confidence in all areas, not only riding.  What rattled me when I tried riding again was the lack of control.  This was not a spook I could have prevented or anticipated, nor something I could have sat by being a better rider.  That fear made me a timid rider, and horses, being prey animals, are sensitive to their rider's emotions.  If you are tense and nervous, your horse, used to picking up life-saving cues from other members of the herd, assumes there is a good reason for this.  He becomes tense and nervous, and more likely to spook, which creates a vicious circle.  My trainer has cleverly dealt with my fears by working me hard in lessons; she keeps me too busy for fear to get a foothold in my consciousness.  (And it's a win-win because she says she can't work at this high level with any other rider in the barn.)

But now I was alone.  Not just not in a lesson, but the only human on the entire farm.  The chickens, alpacas, goats, and other horses weren't interested, and the barn cat was nowhere to be seen (she wouldn't have cared either).  So, I cued up my playlist on Spotify, set up my wireless speaker in the arena, and rode to music.  I sang out loud, swaying to the music, playing a variety of songs but with the seductive new one in high rotation.  I think Bishop was a bit nonplussed; not sure if he shares my taste.  But he felt I was relaxed and happy, not tense and anxious, so he was, too. 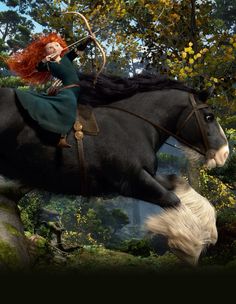 After about 45 minutes of work, and this after City Boy had already lunged him, Bishop was getting a bit fatigued in the heat.  He didn't want to canter and I was going to let it go – he is still green and lacks the confidence to canter with a rider, we'd done a lot of work already, I hadn't ridden in awhile due to trainer's schedule and my back problem, and there wasn't anyone else there.  But then the song from that euphoric scene in Brave when Merida gallops through the countryside happened to come on and I told Bishop he had to go for it.  He caught my excitement and I got a beautiful uphill canter depart.  I didn't make him go in a circle; I didn't ask for a collected canter.  Instead, I whooped and hollered at him and let him go all the way around the arena, as if we were galloping across the countryside, something I haven't done in a decade.  He's normally so afraid of losing his balance cantering with a rider that he won't hold it more than a few strides.  It was such a novel experience for him to have someone whooping at him to go, go, go, that he forgot to be afraid and he figured out how to carry me without trying, he just did it.

Afterward, I threw my arms around his neck and hugged him and he seemed quite pleased with himself.  When I told my trainer later that I thought he'd had fun, she said, "You let him be a horse."  We're always so fixated on what he has to learn, doing exercises that challenge his body and mind, that I don't think he usually has any fun when he is ridden.  He endures it, as horses do, but he doesn't enjoy it.

Why is this blog-worthy?  Well, all blogs are self-indulgent but, more specifically, I have few moments of pure, unadulterated joy in my life.  I am a lucky first-world denizen; it's not that I live in a war zone or in poverty, I'm not depressed.  It's, well, without going into details that would upset family, suffice to say I was raised in an environment where happiness, however fleeting, whether induced by endorphins or luck or love, was feared and discouraged.  Happiness was not to be trusted.  I never bought into this on a rational level, but it has affected me on a subconscious one.  I can't feel that welling of happiness in my chest without having to fight an automatic urge to tamp it down.  The few times true happiness has won through have involved music or horses, and in the last 24 hours, I've experienced both, and combined them successfully.

On Thursday, I ran into a former work colleague in a local coffeehouse.  She was diagnosed with stage 4 breast cancer last December and quit to focus full-time on her treatment.  With her husband and kids, she is going through her bucket list, trying to make the most of the time she has left.  She was excited to report she'd just gone to a Bruce Springsteen concert.  She's a year younger than me.  I'd like to live life to the full without the wake-up call of a terminal disease.  I'd like to not resist every positive feeling or experience.  So, it's a start.
Posted by Piranha Chicken at 02:19