Mistakes Were Made: An Election Post-Mortem

November is a bleak month at the best of times.  I'd been buoyed this year by optimism about the future, with every aspect of my life reconstructing in a promising way.  But that has all come crashing down since the election.  My stubborn belief that I would overcome financial, physical, familial, and other assorted problems has been threatening to give way to the panic and depression I have kept at bay by sheer force of will.

The post-marathon cold morphed into bronchitis which had me confined to the sofa and the bleak company of post-election lamentations on the Web and the obscene gloating of Trumpsters on social media for the three weeks since the election.  I'm rarely ill and the interminable disappointment and frustration of waking up every day thinking it would finally turn a corner and it didn't would have made this the month from hell on its own.

City Boy owes me money, which he is now forcing me to go to court to collect.  It's a fucking nightmare but I can't let it go as it's more than a month's rent.  A trivial sum to him, but it could keep me from ending up homeless.  If you had to ask me who was worse, Trump or City Boy, it would be a toss-up.

City Girl is leaving NYC because she can't afford to live there anymore.  I spent one final night with her as a way of breaking up the long drive to see my little pumpkin; I don't know how I'll see him going forward.  City Girl asked me to store her things until she is settled so I stare at the enormous piles of boxes in my dining room in denial that my friend is leaving the area, quite likely permanently.

The only one who is happy is the cat, who doesn't seem to care that a megalomaniac is now the Moron-Elect, and who spends her days sleeping contentedly on the topmost box of the pile.  What's sadly symbolic to me is simply a new high perch to her royal furriness.

But my little problems pale in comparison to the damage November has done to the country and, thanks to our global economic and military hegemony, potentially the entire world.

I've started this post a dozen times, with as many different approaches to analyzing and commenting on the election, but it's been such a depressing horror show, and I've been so sick, that I let each draft fizzle.  But it's now been three weeks.  Dust has settled and as we all emerge from the horror and disappointment, we need to assess the destruction and cut through the bullshit explanations to understand what really happened and what atrocities are in store.

There's been no shortage of articles analyzing the election, and some of them have been excellent.  But four of the main takeaways that keep getting repeated are inaccurate.

1)   Hillary was a flawed candidate 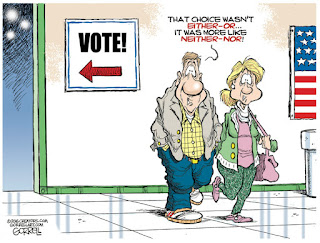 No, she was perceived as flawed.  The Republicans, media outlets addicted to false equivalencies, not to mention rampaging social media, Democrats with an anti-Clinton axe to grind, and a brutal anti-establishment-themed primary created the belief that she was flawed.  In reality, she was one of the least-flawed candidates ever to run, with the skills, experience, temperament, and genuine concern for people to be a great president.  If you had to find any flaw it would be that she is not skilled at selling herself in a campaign environment.  She knows that policy change is incremental and she refuses to make sweeping, melodramatic promises she knows will be impossible to fulfill.  But the latter is what fires up the electorate and gets them to the polls.  And her main obstacle was sexism.  Virtually none of the criticisms leveled at her would have stuck with a male candidate.  America is not ready for a women president, I am sorry to say.  This election unambiguously demonstrated that.  There has always been figurative dick measuring in debates but she lost to a candidate who literally talked about his dick size.

No, he would not have beaten Trump.  He never appealed to minority voters, and he was a one-note candidate.   Now, that note was the economy, stupid, and Trump would not have been able to show up his lack of interest in other policy areas like a normal opponent would have, but Bernie was still singing in the wrong key.  Trump notwithstanding, a candidate has to be a policy polymath.  The president oversees every policy area, domestic and foreign, and Bernie came across as increasingly myopic.  He had one song he played at every concert, he couldn't seem to add repertoire or improvise, and the audiences would be larger and more diverse in the general campaign.  Also, it's rare for a two-term president of one party to be followed by a president of the same party.  Obama took the blame for voter woes that were actually the result of an obstructionist Republican Congress and Republican-controlled states, so Democrats were facing an uphill battle.  Republicans always have an easier time getting out the vote, and the Democrats needed an inspiring choice, an Obama on steroids, to win this one.  Bernie simply had too many strikes against him – his age, his unkempt appearance with flyaway hair and ill-fitting suits, his gruff demeanor, his angry harping on about big banks to the exclusion of all else, his history as a "socialist", his long tenure in government in an anti-establishment-themed election, his lack of accomplishments in said tenure, his lack of foreign policy knowledge and experience, his hailing from a tiny New England state, and his Jewishness.
When Bernie first entered the primary, I thought it was a great lark.  I had campaigned for him in college, and I figured he'd shift debate a bit to the left but I never seriously thought he was a contender for the nomination.  I mean never, not for a millisecond, even when many pundits were saying he had a serious chance of winning.  Just for fun, I bought an organic green Bernie 2016 t-shirt from the Vermont Clothing Company and wore it to one of his rallies, my first political rally.  It was exciting to see the enthusiastic support he drew from (mostly young) people.  But that enthusiasm and support did not transfer to Clinton.  Bernie's call for revolution was as impotent as Occupy Wall Street.  He would have pulled in more younger voters than Clinton but fewer minority and older voters.  It would not have been a winning coalition.

The exact opposite is true.  Berlustrumpi has only four motivations: feeding his ego, power, revenge, and increasing his wealth/brand.  He never expected to win the presidency and has no interest in governing.  Yes, he wants power, but the presidency is too much like work.  He lacks curiosity, intellectual or otherwise, and has no ideological commitment to particular policies.  His appeal was based on populist demagoguery but he has neither affinity with nor concern for people.  Nor does he have any loyalty to his own class.  Pence and the Republican Congress, on the other hand, have a clear policy agenda and free rein to implement it.  They know Trump's four motivations and they can easily manipulate him to get him to sign any piece of legislation they want and nominate any judicial candidates and political appointees they desire.  This piece explains my point in more detail. 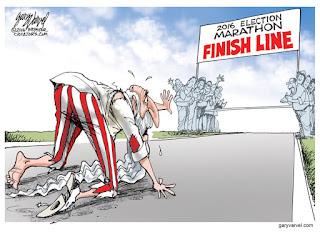 This is admittedly the most compelling and prima facie appealing explanation for Trump's victory.  Based on social media, it certainly appears to be the obvious conclusion.  Of the four takeaways I have debunked here, this is the only one I personally ever gave any credence to.  The problem with it is that the numbers that have come out on voter demographics don't bear it out.  We're not seeing an increase in voter turn-out amongst white men without a college education, Trump's supposed base.  He picked up more minority votes than expected, and many more votes from college-educated women, but he is, at last count, losing the popular vote by over 2.3 million.  Republicans, as noted above, tend to vote more reliably than Democrats, and in the end they fell into line, as they always do, and voted for their party's candidate.  Democrats were not as motivated to get out and vote for Hillary, due to her manufactured flaws and her sex.  The pendulum usually swings after a two-term president.  The election was always going to be tight and turnout was only 56%.  Trump voters who are most vocal on social media make it appear that this election was a backlash against a socially progressive and economically regressive world that had moved increasingly beyond their ken, but the plural of anecdote is not data.

It is tempting to say this election is an indictment of democracy.  Democracy only works when voters make decisions in a fact-based universe.  It doesn't work when people are ignorant, uneducated, gullible. Except that Trump did not win democratically, but that's another post.

Posted by Piranha Chicken at 23:08