Xmas Eve
Just as I get home from feeding the horses at my local barn, Suz rings to tell me that "Silas isn't right" and she has called the vet. It's the call every horse owner dreads, with the c-word hovering, menacing but left unsaid.

But at first it didn't sound like colic.  He was cold to the touch, shivering, temp 98F.  There was freezing rain but he was dry under his spiffy new waterproof sheet and his winter coat is thick and fuzzy.  In fact, he's only had a sheet for about a month and a half.  He survived his first three winters with no blanket and never a sign of minding the cold.  My first thought was that he had sweated under the unaccustomed sheet and gotten chilled from that but they quickly warmed him up, he stopped shivering, his temp returned to normal, but his eye was dull and he wouldn't eat.  He wasn't kicking his belly or showing other signs of colic though, and he was pooping.  [Sorry non-horse people, but the presence or absence of poop is the difference between life and death for horses, so we're obsessed by it in a way that we understand seems bizarre to you.] 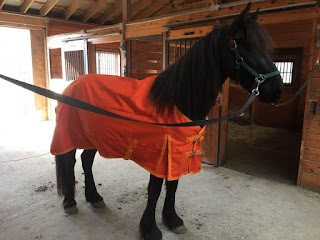 But the freezing rain delayed the vet's arrival and by the time Dr. C. arrived Silas was wanting to roll and the barn slaves were walking him around the indoor.  Suz gave him oral banamine for pain relief.  He was liking the attention but still obviously not his normal cheeky self.  Vet gave buscopan and butorponal for pain relief.  He heard gut sounds in all four quadrants [horses fart a lot – sorry again, non-horse people] but he did detect what he thought was a slight impaction in the right colon.  He was severely dehydrated so he started an IV and also tubed him.  Silas was refluxing badly – he got 9 litres of fluid.  The more he examined him, the more serious it appeared, and it was decided that he needed to go to hospital, at the very least for the IV and to administer pain meds since obviously the oral banamine was getting nowhere.

Luckily, Suz was both able and willing to trailer him the hour and a half to the nearest hospital.  Did I mention Xmas Eve is also her birthday?  I was beside myself and helpless being both broke and far away; I can never repay her dedication and kindness.  Her response was simply that she knows I'd do the same for her, which is true.  And she and everyone else at her barn adore Silas and would do anything for him, never mind me.  When I lamented her birthday and Xmas Eve being ruined, she replied that she was just happy she caught it in time to help him, that she could have found him dead or beyond help, as has happened in the past.

But Suz's devotion to me and my baby boy was not shared by the hospital.  They would not admit him without a credit card that would hold $10K, which is the typical amount for colic treatment, and all three of my cards are maxed out.  It's the first time in my life that has happened and I have had no access to credit for an emergency such as this.  To make matters worse, I have always been diligent about insuring Silas since before he was first shipped to me as a weanling.   But I just had to let his insurance lapse because I could not afford the premium.  This makes me sick because insurance would have covered all of this staggering expense that is now going to be piled on top of my existing debt.

So what did I do?  I called one credit card, lied about my income, and got a $2500 increase on my credit limit.  A start, but not enough.  Back when my dog was sick, I had used a special credit card just for vet bills.  But he died in 2011 and it had since been deactivated for lack of use.  I had to reapply for it, again lying about my income, and got a $7K limit.  That gave me at total of $9.5K.  Not quite the $10K minimum they wanted, but they took it, thank fuck.

It was nearly 4pm before he arrived and was examined and I got some news.  I have never been so scared in my entire life.  And this was Xmas Eve, my favourite holiday.  Looking back, I don't know how I got through the day.

Sometimes just the bumpy trailer ride alone can get a colicky horse to poop but no such luck.  Vet at hospital at least sounded cool and competent over the phone.  She said he had a huge impaction, not small like regular vet had opined, and his small intestines were extremely distended and severely displaced.  They tubed unbelievable amounts of foul reflux.  She said she had never smelled such an odor, quipping that "Silas was making silage."  It had clearly been brewing for awhile, but he'd eaten his dinner with his usual gusto the previous evening, kicking his dish and demanding it be filled as per his usual entitled insistent attitude.  Friesians have a reputation for being so stoic that by the time they refuse food and actually show clinical symptoms of illness, they are practically dead.

They loaded him up with oil, salt water, and drugs for pain and to relax the gut and encourage motility and said they'd ring me Xmas morning unless there was a change for the worst:  "No news is good news."

I spent a literally entirely sleepless Xmas Eve night with the phone on my pillow, willing it not to ring, and trying not to imagine worst-case scenarios.  For the non-horse people reading this, the dread is that the intestines will twist, necessitating surgery to remove the necrotic section.  Friesians do not do well with anaesthesia, and the prognosis for colic cases needing surgery is extremely poor.  Most who go into surgery do not wake up.

Xmas Day
Vet reported that he was much brighter in the morning – he'd pooped twice and pulled out his IV, and was making it very clear that he was NOT happy the other horses were getting fed and he wasn't.  But there wasn't much change internally – impaction not cleared, still bloated, and small intestines still horribly displaced.  He wasn't coming home but vet was optimistic that he just needed more time and that surgery could still be avoided.  They'd given him lots of mineral oil which she hoped to see streaming disgustingly down his legs by the next morning.  I breathed, just a little bit, but still got no sleep Xmas night.

Boxing Day (or St. Stephen's Day, as you prefer)
No oil.  I had hoped for better news this morning but exam (I'll spare non horse people the details of how this is done) showed that the small intestines were still displaced and blockage must not be clear due to the oil's non-appearance.  They were giving him hot mashes and horse tea (water with a handful of sweet feed mixed in), which he was eagerly sucking down.  We decided that turning him out for awhile might shake things back into place.  (Also, feeling better and not being used to confinement, he was climbing the walls in the stall.)  There was a risk he could roll and create the dreaded torsion that would necessitate surgery, but, at this stage, vet and I agreed that the likelihood movement and even rolling would help outweighed the risk it could hurt.  Her hypothesis is that the intestine is resting on a section of colon that is still impacted and once it clears it will fall back into place.  If not, well, the other possible explanations are all ominous.  She said she'd update me later.

Unfortunately, per the evening update, he didn't move around much in turn-out – lazy or just exhausted from the ordeal.  So, the plan is to keep giving him tea and mash overnight and hope to see that oil by morning.  At this point, I am so tired I can hardly see straight.  I desperately wish I could see him but can't afford to drive all that way and have nowhere to stay if I could.

And he won't be coming home tomorrow even if impaction is cleared and intestines are back to normal because the next step is challenging with hay to see if he colics again or digests it with good motility.  So, he won't be released until at least Wednesday at this point.  And Suz is out of town for a week's much-deserved holiday so getting him home is a problem.  Luckily, she has a boarder who is willing to pick him up after work any night this week.  I HATE to be in anyone's debt, but I have no choice here.

I hoped he'd be out of the woods by now, and surgery would be definitively ruled out.  But I have another anxious night ahead.  I wish I could just be with him, even if there is nothing I could do to make him better.  I just want to touch him and talk to him and tell him I love him a hundred times a minute. 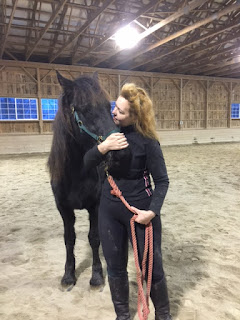 Posted by Piranha Chicken at 22:48