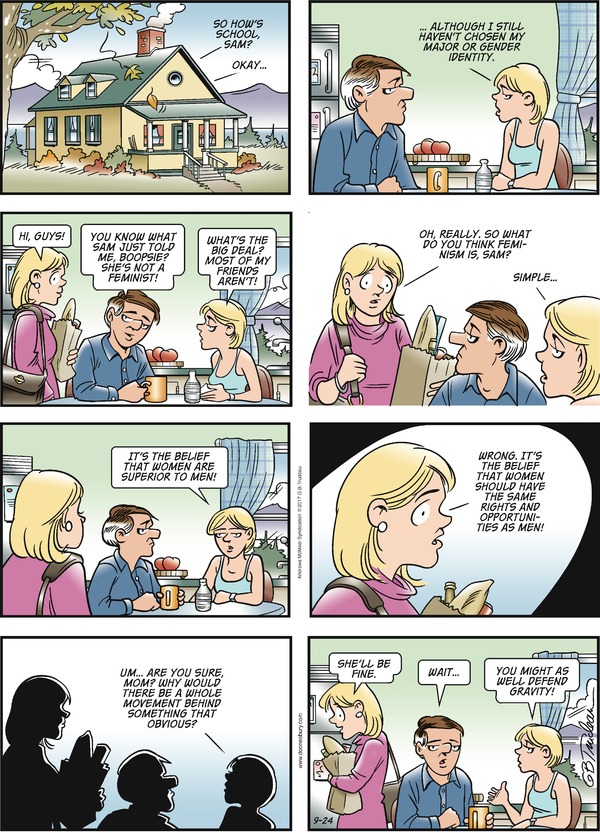 Young women are rejecting the term "feminist".  When I hear a woman state that she is not a feminist, I grill her on her views.

"So, you don't think women should vote?  You don't think we should be allowed to drive?  Be educated?  Own property?  Leave the house without a man's permission?"

They are invariably shocked and stammer that they believe in complete equality of the sexes.

At which point they protest that they don't hate men and they don't believe women are superior.  That is what they believe the definition of "feminism" is.

So, help me out here, people.  I'm having a Rip Van Winkle moment.  When and why did the definition of feminism morph in the popular view from equality to misandry?

I can take a guess:  It's the same problem as Charlottesville.  The civil rights movement changed the laws of the land and forbid legal discrimination on the basis of race and sex.  But it didn't change people's attitudes.  It affected how they could behave, what they could say in polite company, but not their mindset.  The disgusting racist displays we have been seeing since Trump's ascendance to the presidency indicate that racist attitudes have not died out; they were just hidden underground (another reason to protect free speech, but that's a rant for another day).

In a related fashion, men have increasingly been called out on sexist behaviour so some of them have learned to put on a veneer of civility to women in the workplace to avoid getting fired.  But it hasn't changed their attitudes, just their surface behaviour.  Their resentment at having to treat women like equals has manifested in a victim mentality.  They used to be in charge and having to share power with women (and minorities if they are white) feels like a defeat, a blow to their egos.  So, they retaliated by labeling feminists as man-haters, claiming we want special rights rather than equal rights.

Gays have also been accused of requesting special rights when seeking equality.  When same sex marriage was being debated, it was common to hear opponents blathering that gays were asking for special rights.  That twist was a way of delegitimizing a bid for equality.  It's the same with feminism.  By claiming that women who seek equal rights with men are man-haters who think we are superior to men, they delegitimize the term.  Don't buy into it.  Call yourself a feminist.  Reclaim the word.  Defend gravity.
Posted by Piranha Chicken at 17:04