Another Battle Front in the War on Women

Childbirth has always been dangerous for both the women and babies involved. In the developed world, dangers from lack of medical care have been replaced by dangers from overly aggressive, unnecessary and harmful medical interventions. Every birth is a battle in the war between women and medical staff, and there can only be one winner: Either the woman and baby win or the medical staff wins. Women have only three defensive weapons to bring to their personal childbirth battles against medical staff:  1) Knowledge that the medical interventions being forced on them are unnecessary and unhealthy; 2) The word "NO!"; and, 3) a personal advocate, such as the baby's father or a doula.

That last defensive weapon is critical because a woman in labour is not in the ideal position to fight verbally, or physically if necessary, against intrusive medical staff who are determined to violate her bodily integrity and harm both her and her baby physically and psychologically.

The novel coronavirus pandemic prompted some hospitals in the United States to issue policies forbidding visitors—including birth partners. In practice this means women giving birth during the pandemic would be forced to give birth with only medical staff present, and new fathers would not get to meet their children until the mother and child's release from hospital.

To say I have been apoplectic with rage over this new policy is a gross understatement. My fury and frustration have been incandescent. Without someone on her side, a woman goes into battle with just two of those three defensive weapons, and the results will be catastrophic for both mothers and babies. A woman should not need a back-up to her birth plan and the word "NO!", but, in practice, a spouse or doula to reinforce the "NO!" is crucial to avoiding a cascading series of harmful interventions. (Which is not to say that all partners behave as advocates: Some side with medical staff and put additional pressure on their partners to acquiesce to harmful medical interventions.) 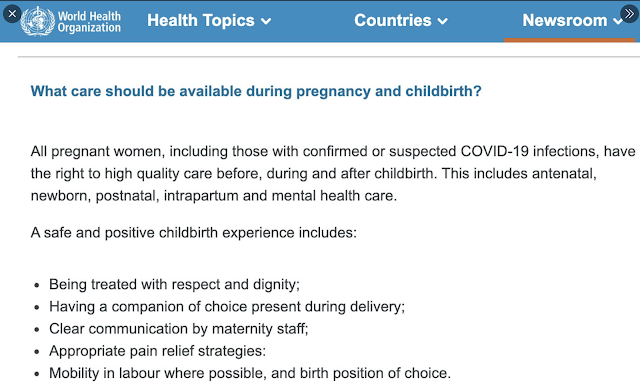 Medical staff undoubtedly reacted with glee to the prospect of having their victims even more at their mercy, but their cruel pleasure was short-lived in New York. I first found out about this barbaric policy a few days ago, a violation of both domestic and international human rights law, and specifically forbidden as a response to COVID-19 by the WHO, when Columbia-Presbyterian Hospital in NYC announced it and it trended on Twitter. 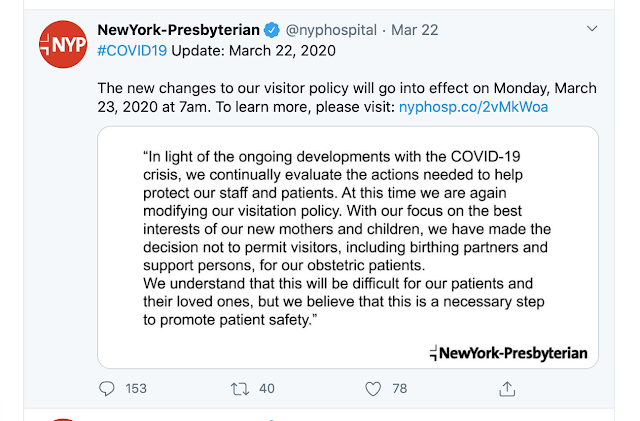 Today, I read that this cruel and harmful policy has been overruled by the state. According to this piece on NPR, "...earlier this month some New York hospitals told pregnant women they couldn't have any support person during childbirth. Within a week the state health department had prohibited that policy." 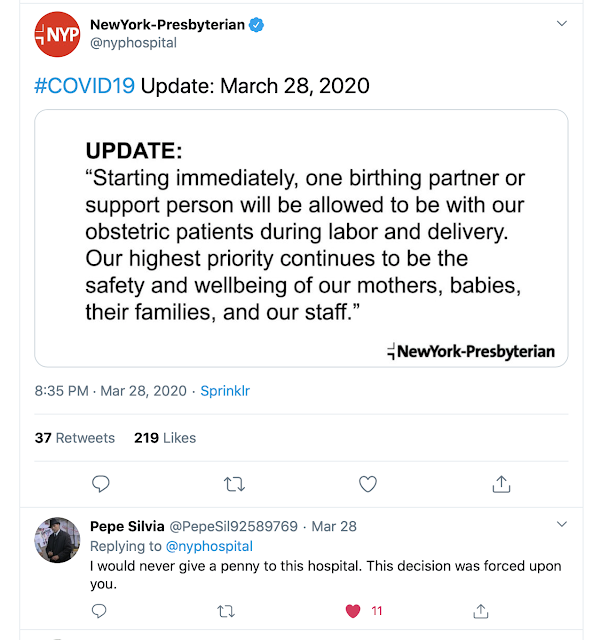 Thank goodness. Birthing women have a hard enough time battling medical staff without depriving them of one of their few weapons to protect their own health, and the health of their children.
Posted by Piranha Chicken at 18:02