No Moo? No Problem! 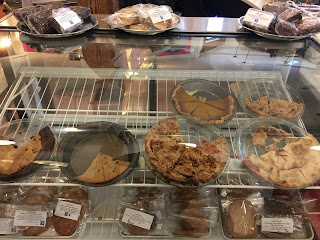 As we are in so many other ways, we are spoiled for choice for local ice cream in the Valley.  There are soft serve ice cream stands open in summer, farm stores and shops open year round, and local brands sold in grocery stores so you can pick up a pint with your regular shopping.  I could write a post on each of them – and I just might.  If blogging about ice cream paid the bills, I'd definitely have my dream job.

I'm going to begin with Herrell's, for three reasons.  One, they are the best and we might as well start at the top!  Two, they have just completed a major renovation of their shop.  There was a soft opening end of October and the official grand reopening is coming up on Sunday, January 22, Noon-2:00pm.  Third, they have sold wonderful baked goods since the 1980s, not just as an also-ran to their ice cream, but delicious enough to stand on their own merits, and their newly renovated shop gives them enough space to display their entire line of baked treats at once and not have to rotate them.  In fact, I should do two posts on Herrell's, this one on their baked goods, and another featuring their unique ice cream.

Most ice cream shops have cookies, brownies, sometimes pies, to serve à la mode.  A few even bake them themselves.  But you probably wouldn't think to go there, rather than a proper bakery, if you were craving a chocolate chip cookie.  With Herrell's, you should.   For over 25 years, they have been putting as much effort into perfecting yummy baked goods as they have into their ice cream, with equally superior results.

Ice cream may be my favourite food, but baked goods are a close second and, as an intrepid baker myself, I am extremely picky and judgmental about every cookie and brownie I buy.  I'm lucky not to have any food sensitivities but it seems that everyone I know is either avoiding gluten or eggs or dairy (or all three!).  I have attempted to bake to accommodate various dietary restrictions, and it is always a trial to get the flavour, texture, and appearance up to par with the traditional version.  Herrell's has embraced this challenge.  Since 1993, they have sold Herrell's No-Moo dairy-free cookies and brownies.  Some products in their No-Moo line have eggs, some are vegan, and some are gluten-free.  That may sound complicated outside of the Valley, but it is necessary to cater to a variety of dietary restrictions and choices here.  It also means that, whatever your personal dietary needs, you can find a treat at Herrell's that you can enjoy, whether you decide to top it with No-Moo ice cream or devour it on its own.

Over the years, I've tried all of Herrell's baked goods, mostly à la mode at first, but I eventually found myself gravitating to Herrell's when I was just after a cookie or brownie (or, better yet, for those of us who don't want to have to choose, a brookie) because theirs were better than the ones at other local bakeries.  If they were out of the traditional version, I've always been happy to get the No-Moo version instead because they were just as tasty.  That was noteworthy to me.  There has been a tremendous improvement in dairy-free, egg-free and gluten-free products in recent years, but you still wouldn't normally eat them unless you had to.  I truly shit you not when I say that at Herrell's, it doesn't make a difference.

Purely in the interest of conscientious research, of course, I ate my way through some of the Herrell's 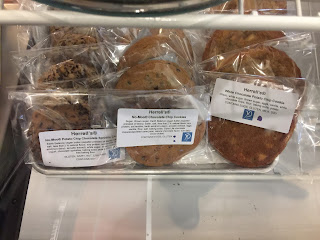 No-Moo line, along with the traditional products for comparative purposes, to see if my anecdotal impression over the years about taste held up to further scrutiny.  (Yeah, yeah, I admit it: It was an excuse to eat lots of cookies and brownies.  You got a better research idea??)

First up, the classic chocolate chip cookie.  The No-Moo version is heavy and dense – nothing worse than picking up a light cookie – and almost molten in the centre.  It's not overly sweet, which is rare in a cookie I haven't made myself.  I don't think there is anyone on earth pickier about chocolate chip cookies than I am and these meet my high standards.

One day, I decided to take a chance on the No Moo potato chip cookie.  I imagined any cookie with potato chips in it would be crunchy and greasy and salty and I was just sceptical about that.  I was wrong; it's nothing like that at all.  It is chocolatey, with lots of tiny chips, not salty, and the potato chips are ground finely enough that they add texture but not crunch.  Just try it.

The final No Moo vegan cookie I tried was the chocolate walnut flourless.  It's made with egg whites, like a meringue, so it's gluten-free but not vegan, but it is delicious, with the slightly shiny exterior and rich interior characteristic of flourless cookies. 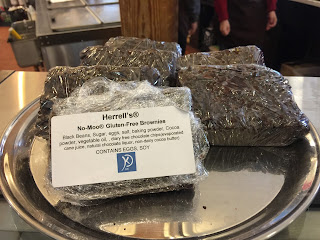 The last No Moo vegan treat I've sampled is the vegan black bean brownie.  Using black beans in vegan brownies to replicate texture normally created by the eggs has been a thing for awhile.  I've even tried it, with minor success.  But I was never very enthused about it.  After tasting Herrell's version, I am officially a convert.  They have great texture and flavour, with gooey chocolate chips that melt in each bite.  You would never know they were vegan or black bean if no-one told you.  Get one warmed up with ice cream on it and you will be in heaven.

Herrell's was in the vanguard with non-dairy ice cream, and also with non-dairy baked goods.  Sounds a bit odd but it actually makes sense: If you make delicious ice cream and baked goods, you want everyone to be able to enjoy them.  The taste and texture of food products for people with various food intolerances has improved exponentially, but Herrell's was doing it before it was cool, and they've put a lot of research into achieving superior flavour and texture.  If you live in the area, or are visiting, go to Herrell's.  I personally guarantee your foodgasm—and no-one is paying me to say that, I speak from personal experience and enthusiasm.
Posted by Piranha Chicken at 22:30