Valentine's Day is the kick in the arse some relationships need 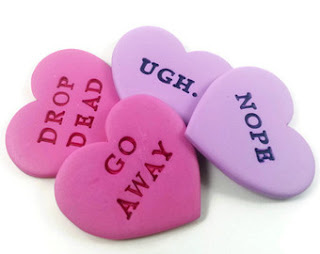 It's hip to hate on V-Day.  All the cool couples scorn it.  It's passé, a cheesy Hallmark holiday to sell overpriced roses and waxy chocolate, an obligatory sex day even if it falls on a work night and your back hurts from shovelling all that snow.  Besides, if you need a greeting card company to remind you to express affection to your partner, your relationship has problems ain't no annual blow job gonna fix. 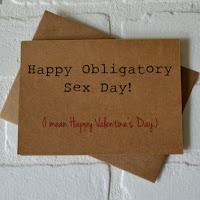 All men hate Valentine's Day.  At least, I have yet to meet one who doesn't.  My ex refused to even acknowledge its existence.  Despite having had two long-term relationships in my adult life, the only Valentine's Day gift I've ever received was from a high school boyfriend who gave me chocolate-covered strawberries.  Strawberries are not exactly in season in Chicago in February, so they probably tasted like Styrofoam but, at 16, I thought it was pretty sweet a boy had gone to Godiva to get me something.  (30 years later, he now hates V-Day, too.)


Guys give the same reason for rejecting the holiday:  Forced displays of affection are meaningless.  I agree.  For the couple getting each other generic gifts, like the cliché of the executive who has his secretary order a dozen roses for his wife every year, it is meaningless.  But, even if you choose not to celebrate it, there is a lesson couples can take from V-Day, if you apply a little perspective to the holiday.  I first wrote a defence of Valentine's Day 14 years ago, the gist of which was:  No, you cannot feel emotions on command, nor should you.  Yes, you and your partner should have sexy romantic fun time and give each other random gifts throughout the year.  But life gets in the way.  Couples with the best of intentions to make time for each other, to keep the romance alive, to have other than perfunctory weekly sex, don't.  Responsibilities, from work to kids to housework, family, friends, hobbies, binge-watching Netflix, sleeping, take priority.  You may even feel guilty taking time for yourselves as a couple—spending money on dinner out or a babysitter, or staying up late to fuck.  Valentine's Day isn’t going to repair a broken relationship.  It's not going to reawaken sexual desire or feelings of warmth and affection, but if they're there, just pushed onto a backburner, it is an excuse to make your relationship a priority, guilt-free.  You can go out for dinner and agree not to talk about the kids or the mildew problem in the basement, hold hands and flirt like when you were dating, schedule a hot tub and massage and then go home and fuck without worrying about being tired in the morning.


In that way, it's not so much forcing you to feel emotions based on the calendar as providing an excuse to express ones that are already there.  If the day itself doesn't work for you — maybe a kid is sick or one of you has a major work deadline or it's just too cheesy — use it as a reminder to schedule that time at the first opportunity.  If you find you don't want to, that's a red flag.  You don't have to celebrate or acknowledge V-Day at all but if the thought of having any kind of a date night leaves you cold, the relationship may be dead and you just didn't notice.  It may be possible to resuscitate it or it may be time to move on.  Either way, don't hit snooze and ignore the wake-up call.
I used to write a sex advice column in the persona of a dominatrix.  For a completely unserious lark, the column received a lot of serious questions.  By far the most common one was "I'd like to try <insert sexual activity> but I'm afraid to ask my partner."  V-Day, or its personalised substitute, if you prefer to use your birthday, anniversary, Arbor Day, etc., provides an excuse to kick a routine sex life up a notch.  If you don't feel comfortable straight-up asking for what you want, you can pen it as a fantasy, draw a picture, make coupons, or, if all else fails, there's always alcohol and handcuffs.

(That last was a joke – not suggesting anything non-consensual.)

If you agree as a couple to ignore Valentine's Day, that's your prerogative.  But in my experience it's usually the guy who wants to disregard it and the woman goes along because she has no counterargument and she wants to seem cool and not sappy or needy.  Ladies, here's your response.  Gentlemen, bear in mind that this is the one holiday that is guaranteed to get you laid.  How can you not dig that?
Posted by Piranha Chicken at 15:58