NY Sheep & Wool is like Xmas:  I look forward to it all year, and when it's over, it's such a let-down that I start looking forward to next year to cheer myself up.

Last year I wrote a blog post about it, which you should re-read because you have forgotten it by now.

A few points to stick in for this year:

1) The Taconic State Parkway is lovely & scenic & also the deer capitol of the known universe.  Not just the odd deer grazing by the side of the road at dusk, right as I am driving home, but dozens.  Each year I worry that this is going to be the year one of them leaps in front of my car.  But this year there were none.  I didn't see a single deer, alive or dead (there are usually several of the latter).  It was weird.  I had been wishing NY would reintroduce wolves.  Perhaps they did.

2) There are parking areas along the Taconic to facilitate admiring the majestic views of the Hudson River Valley.  Except that when I see signs for "parking area" I think of a place to make out.  Someday I hope to be able to drag a long-suffering boyfriend to NYS&W just for this purpose.  The snogging will make up for him having to look at fibre animals and yarn and eat fair food all day.

3) It's a tradition to knit a so-called "Rhinebeck sweater" to show off, or at least a Rhinebeck hat, scarf, shawl or similar item of outerwear.  People oooh and aaah all day, complimenting strangers on their skill.  I tapped one woman on the shoulder and gushed over her intricate cable scarf.  She told me the pattern name and it went straight into my Ravelry queue.  (For my non-knitting readers, Ravelry is a website that provides a database for you to input all of your yarn, needles, books, etc., and create a queue of patterns you want to knit.  There are also discussion groups, and online project 'notebooks' where you can add photographs, details of what yarn and needle sizes you used, and notes on projects.  These notes help other knitters who knit that same pattern in future, both as inspiration and to point out difficulties, customization, errors in the pattern, etc.  Basically, the people who invented Ravelry are gods in the knitting world.  They deserve to be canonized whilst they are still living.  It is the best website on the Internet, and I am including every porn site in that assessment.)

Anyway, back to the Rhinebeck sweater:  It has been a record warm October and it was 78F on Saturday.  Some people just sweated it out in their woolens, determined to show off their hard work, others said fuck it and stripped down to t-shirts and tank tops, an odd sight amongst the fall foliage.  The vendors selling hot cocoa and cider must have cursed the weather.  Me, I enjoyed not freezing.

4) Speaking of vendors, I decided not to waste an hour of precious yarn fondling time in line waiting for a lamb sandwich at lunchtime.  I held off until 4pm, by which time there was no line.  It was worth delaying lunch, despite the fact that the vendor, keenly aware of both its popularity and monopoly, had increased the price from $10 to $12 this year.

5) Each year I allow myself to purchase a few unique skeins, yarn I would not be able to find again if I did not buy it then, and take photos/notes on the rest.  I fantasy shop, looking with envy at everyone with their bulging bags (there are people who save up all year for a yarn buying orgy at Rhinebeck), each time thinking next year I will have money to buy whatever I want, even a custom-made spinning wheel and some Gotland sheep.  And next year comes and I still don't have any money.  It's depressing and this year I really should have bought nothing.  As restrained as I was, it was still extravagant to even spend the gas money and admission price.  I felt guilty buying anything at all, as well I should.
One thing I said no to was the world's sexiest sweater.  I would have bought just the pattern, saving it until I could afford the yarn at some point in the future, but the vendor, rather unusually, was not selling the pattern separately.  You had to buy enough of their yarn to make the garment and the pattern came with it.  In this case, it would have taken 5 skeins at $30 apiece to make the sweater, so of course it wasn't an option for me.  But just look at this cardigan, one of the most flattering I have ever seen. 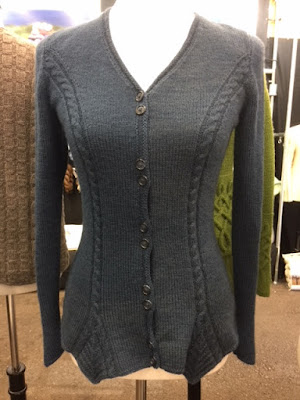 For my non-knitting readers, let me introduce you to the concept of "negative ease."  A garment that is tight and shows off your figure is said to have negative ease; conversely, a loose garment has positive ease.  Whether and how much of negative or positive ease you want is a matter of personal style and preference.  As someone with a pear-shaped figure, I need my clothes to fit like a second skin in order not to look like a hippopotamus.  In other words, beaucoup negative ease, like you see here.

6) The Vetricyn was a gift-with-purchase of the chicken book.  Wait, chickens at Rhinebeck?  Is someone making yarn out of chicken feathers?  No, poultry are not fibre animals but the book sellers often include some non-knitting books and this author had written the best guide to keeping chickens I have ever seen.  Due to the rising popularity of chicken husbandry, zillions of poorly-written how-to books have flooded the market but this author knows her shit.  My hairdresser recently bought a house and is planning to get chickens.  She has been asking me zillions of questions so I got this for her Xmas present.  It's perfect.

The wine?  There is an entire building of local food vendors, including the NY wineries.  This had the virtues of being both cheap and the most unusual wine I have ever had, to be saved for a special occasion.  The jams include blood orange (2), cranberry, and raspberry bourbon, and the peanut butter has dark chocolate in it.  Each year, I stock up on three tubs of the Gobs of Garlic spice mix, which is the 'secret' ingredient in just about everything I cook.  (Shhhhhh.)
Posted by Piranha Chicken at 01:22