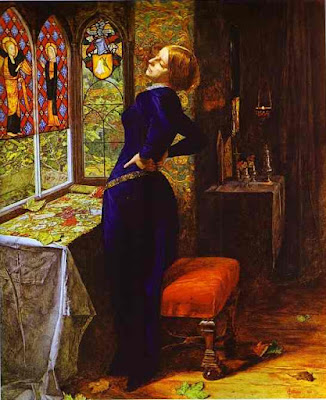 Nov 1 is the Celtic New Year.  When first I heard this, I thought the middle of fall an odd time for a new beginning.  But, on further reflection, it makes sense.  I have never found Jan 1 a satisfactory date for new beginnings.  It's officially Xmas until Jan 6, and I squeeze every last second out of the holiday season.  Jan 1 is a major holiday, with the house decorated, full of treats and guests and a celebratory usual-rules-are-suspended atmosphere.  Who the hell is going to get to the gym, start a diet, or begin any other ascetic project then?  Most resolutions don't last beyond Jan 10.  I understand eating healthier and working out after the indulgences of the holidays, but it's just too depressing in the bleak days of winter to turn a blank page in every sphere.  Summer feels like a viable fresh start time to me—the light and warmth are motivating.  But I have always structured my life around the academic calendar so the main time that feels like a clean slate is autumn.  Sept comes at the end of summer, when you are vacationed-out and ready to get back to work.  Jan 1 comes at the beginning of a miserable, dreary winter, when you need to keep your spirits up any way you can.  In contrast, with autumn comes the proper readiness to turn over a new leaf, literally and figuratively.

Nov 1 is a bit late for that, pity the Celts didn't make it Sept 1.  But their lives were oriented toward survival, not giving up their daily Starbucks latte or using their gym membership.  Late autumn meant the end of the agricultural year: The crops had been harvested and stored, animals slaughtered or herded to winter pastures.  It wasn't so much that winter was a new beginning for the Celts—it's a modern interpretation to call it their new year—as the harvest represented a significant ending, with survival ensured for another winter.

It's not perfect, being midway between Sept 1 and Jan 1, but I always use Nov 1 as a take stock time.  Where are my priorities?  What do I want to accomplish by calendar year's end?  What part of my life hasn't yet gotten an autumn reboot? 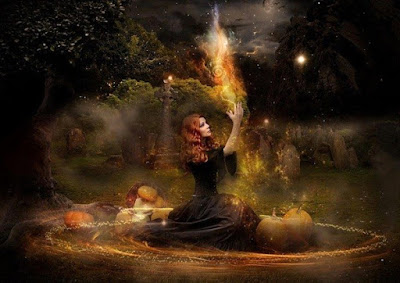 Home, hearth, and fire formed a focus of Samhain rituals, as did a renewing of laws and tribal relationships, and divination to predict future fortune.  Superstitions called for the banishing of evil spirits, as this liminal time was thought to make passage between earth and the spirit realm easier.

There's not much for an atheist to work with there.  My take:  Since there are no spirits, no afterlife, and no way to divine the future, it is critical not to waste time.  Life is heartbreakingly short and if your basic needs for the winter are taken care of—food, a roof over your head—then your priority should be on making the most of what little time you have.  The Celts' Samhain festivals included feasts, pranks, and sex; it wasn't all slaughtering roosters and sprinkling blood on the threshold for good luck.  (Note to the Piranha Chickens:  You don't have to worry, that's emphatically not my thing.)

Over the summer, a former work colleague died of breast cancer.  She was exactly my age—our birthdays were days apart.  She had everything going for her, both personally and professionally, and I was terrified by someone my age being struck down.  Of course, people my age and younger die of illness, accident, or violence every minute but it affects you profoundly when it is someone you know.

When I went to my sister's wedding in July, I met my cousin's best friend.  They'd grown up on the same block in London and were close friends since primary school. She and my cousin had big plans to celebrate her 50th birthday the following week.  The wedding had a Steampunk theme and when I complimented her on her outfit, which included a black lace corset, she joked about how it showed her "shark bite" but she didn't care.  I figured she must be joking and gave her a sceptical look.  She said she'd had breast cancer 7 years prior and she called the scar her shark bite.  Fast forward to a later conversation at the reception when I asked her what she did for a living.  She said she had been made redundant about 6 months prior and decided to collect her pension rather than look for work.  I was puzzled how she could collect a pension at 49.  She replied matter-of-factly that you can do so when you have terminal cancer—hers had recently returned and spread.  We've kept in touch via social media and I have been following her bucket list travels with a mixture of fear, pity, sadness, helplessness, and rage at the brutal unfairness of life.

My mother had breast cancer 14 years ago.  Luckily, she hasn't had a recurrence (not that she is inclined to be tested, and I can't say as I blame her) but her friend, who has been helping her in practical matters, this summer suffered a recurrence of her own breast cancer.  It has spread to her bones and she, too, is ticking off items on her bucket list. 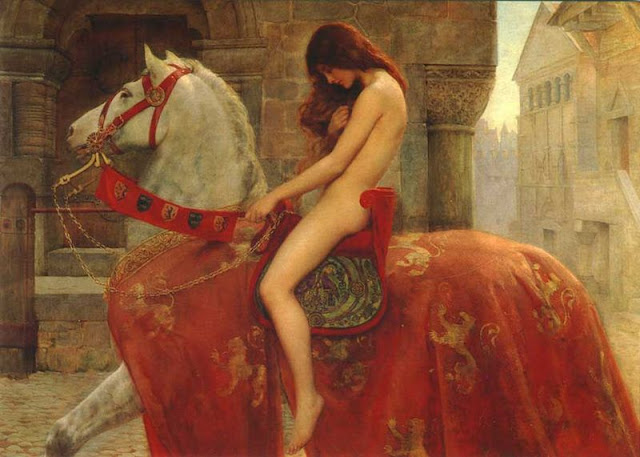 Also through social media, I learned that a classmate of mine from college has cancer.  She has posted pictures in her hairless mid-chemo state, with depressing updates on her multiple surgeries, treatments, and prognosis.  She had recently lost her own mother to cancer.  Another college classmate, two years older, died of breast cancer this summer as well.  An acquaintance of mine from the Friesian horse world, slightly younger, died of breast cancer, and another horsey acquaintance, slightly older, was diagnosed with it.  A woman at my barn also died of breast cancer.  She insisted on working until she literally fell over and my trainer let her work as a favour, even though every stall she mucked had to be redone towards the end as her strength failed, because that normalcy kept her spirits up.  A beautiful memorial garden was planted for her at the barn.  We thought 2016 was bad (and it was) but 2017 has given it a run for its money.

Again, I know that the plural of anecdote isn't data—statistically, the fate of these women should not worry me any more than the horrors I read daily in the news—but these illnesses and deaths have touched me in a period when I was already making major changes in every area of my life, and considering priorities and plans.  Do I need to move back to NYC or another major city for better work prospects?  Am I going to be able to have children?  Is it too late to achieve any of my life goals?  I feel a desperate sense of urgency to do all the things; I've wasted so much time already.  I've been a lifelong procrastinator, both personally and professionally.  I've always put everything off, figured there was always tomorrow, always next year.  Anaïs Nin said, "Life shrinks or expands in proportion to one's courage."  I figured mine would kick in someday. 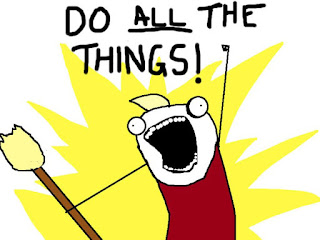 But the new wrinkles that appear on my skin daily, the new aches after a hard workout, the new age-related job rejections, all remind me that tempus fugit.  Some of my college classmates started an online menopause support group.  Um, what?  I haven't yet hit the milestones of marrying, buying a house, starting a family, embarking on a career ladder, and my contemporaries are happily chatting about how to embrace "the change" and posting pictures of themselves visiting their children at parents' weekend at our alma mater.  There was this boat, see, and I missed it.  What was I doing 18 years ago when they were having kids?  I was living in Europe, pursuing education as an end in itself.  I'm happy with some of my life choices but most of them have been made through procrastination and a misguided sense that I had endless time and could put off seeing friends, practicing music, writing stories, not to mention earning a proper living, until some vague future reckoning when I'd magically overcome my pathological procrastination without effort.  I saw a fat girl at the gym the other day wearing the trite t-shirt slogan: "Be stronger than your excuses."  It's a testament to my current mental state that instead of rolling my eyes at its hackneyed sentiment, it resonated. 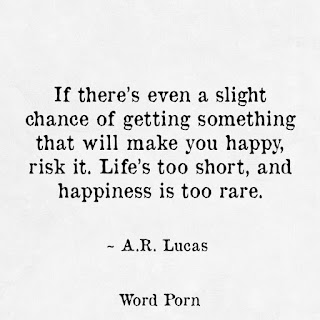 I can't keep "someday-ing" every facet of my life.  Someday I'll have children.  Well, I'm 48 ½ today.  Someday I'll have a farm.  Well, I have two deeply beloved horses, that it's gut-wrenchingly painful that I never see, whom kind people have been generously keeping for me for years, waiting patiently for me to get my shit together and get that farm, on which I also want sheep and reindeer, and to be able to have a dog again.  Someday I'll sing at the Met.  Well, I am beyond the age when voices start to deteriorate and you're considered washed up in the opera world. Every competition and program has a cut-off age of 30.  Someday I'll have great sex every day.  Well, I've reached the outer limits of fuckability agewise.  Someday I'll finish my PhD, get a book contract, write a piece for The Atlantic, visit the Wizarding World of Harry Potter….you get the idea.  All has to be acted on now because we're not promised tomorrow.  Time to banish those demons (Maybe burn a little rosemary? Or was it oregano?  Damn, I forget.  How about I just simmer some mulled wine on the stove instead?) and accomplish something. 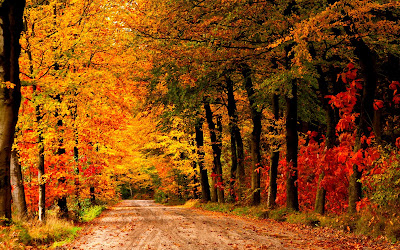 Posted by Piranha Chicken at 18:36