Not a Good Week for Women

Oh, it's great that Jabba the Hut in a bathrobe is finally being held accountable for 30+ years of sexual assault and harassment.  But the unfolding story is like Weinstein's expanse of back hair:  It just goes on and on and you don't want to contemplate its existence, let alone look at it.

Weinstein harassed, threatened, groped, and assaulted women in many different places and contexts but his favourite method seems to have been to invite actresses to a hotel room to (supposedly) review a script and discuss a part for her.  He'd then request some sexual favour as a condition of getting the part.  His accusers have said he demanded everything from massages to threesomes but my personal favourite was this one:

He is definitely not alone amongst members of his sex in wanting hot young women to watch him flog the bishop, but definitely alone in thinking they would actually enjoy it.  Dozens of women (by the time you read this, there will probably be a few dozen more) have said that when they turned him down, their careers suffered.  Unfortunately, this means that we now look at the young women in his films with an automatic question in our minds about whether they gave in.  Even more disturbing are the rape allegations, and those victims are also coming out of the woodwork by the dozen.  It's easier for the ones who got away to admit they were propositioned than for the ones who either acquiesced or were raped to speak up.

What they all have in common this week is an unjustified backlash for not speaking up sooner.  The general outcry is that if someone had said something years ago, he could have been stopped before he harmed more women.  I even had to school one shithead who was calling for women who hadn’t spoken up to be prosecuted as accessories for his subsequent crimes.  Sexual harassment and assault victims who don't report the crime are sometimes wracked by guilt that the perpetrator will go on to hurt others.  But the cost to victims of speaking up is almost always higher than to perps.  Less than 12% of reported rapes result in any kind of conviction.  Some of Weinstein's victims did go to the police, who did nothing.  Others were paid off for their silence.  No-one in Hollywood was surprised, both because actresses had warned others and because the environment of male entitlement to, and objectification of, women is ubiquitous, both inside and outside of the movie industry.  The casting couch isn't a myth; it's a cliché.

The Weinstein scandal coincided with my efforts to help a friend who finally left her abusive husband, got a no contact order, and is attempting to start divorce proceedings.  But she has been unable to get an attorney because she was a SAHM for 18 years.  He was the breadwinner; he controls the money, and he has withdrawn all the money from their joint bank account.  She has called literally every divorce attorney in her (red) state, along with the bar association, legal aid, charities for domestic abuse survivors, etc., but there are no pro bono legal services for divorce in her area.  It's infuriating.  I did some research on her behalf and found precedent for petitioning the court to order the breadwinning spouse to pay for the homemaking spouse's costs in a divorce to make it a fair fight but when she ran that by some lawyers they scoffed that it wouldn't fly in 2017.  So, she is screwed. 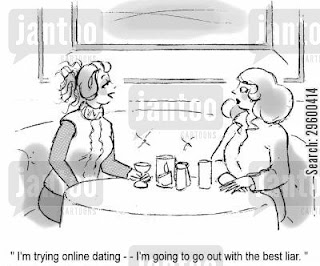 Add to that Trump gutting contraceptive coverage, yet another anti-choice Congressman urging his mistress to get an abortion, and the fact that all of it is Hillary Clinton's fault ("Hog Emperor of Rape Culture" is my new favourite name for Trump), I was in no mood to deal generously with the inane diarrhea of messages from the online dating site I have been using.

I get around 10 messages/day and most fall into one of the following categories:

1) Men who send a generic impersonal message that they clearly send to everyone that gushes “I love your profile" or "we have a lot in common" yet when I check their profile, we’re 100% enemies.  This is the biggest category.  It seems to be common practice for men to send messages based on photos without reading profiles.  Wow, so, you’re a smoker who voted for Trump, doesn’t want kids, and is just looking for hook-ups.  Under favourite book you state that you don’t read and you think the country’s biggest problem is that “libtards" are trying to take your guns.  What is it exactly that we have in common?  Breathing oxygen?

2) Xtians telling me that I am going to hell for being an atheist and/or supporting abortion & evolution.  They usually have Bible quotes in their profiles.

3) Men who message me again after I don’t reply to their first message to tell me I must be some kind of stuck-up bitch.  That’s so endearing!  Gosh, I really missed a good one by not responding.  My loss!

4) Married men who are looking for some on the side.  (These constituted the majority of responses I got at first but they have tapered off since the site started filtering them.)

5) Men who are only looking for hook-ups.

6) Men who don’t want kids.  100% of the men who have messaged me so far don’t want kids.  At the very top of my profile it states that the ONLY reason I am on there is because I want biological children before I am too old.

7) Men who state in creepy, disgusting, or threatening terms what they want to do to me sexually.  I include in this category all the men whose messages aren’t explicitly sexual but ask bluntly where I live, if I am alone, what my phone number is, or ask me to send nude photos.

8) Men who are so illiterate or drugged out I can barely decipher their message.

9) Men who message just to tell me why they aren’t interested in me.  I find this category particularly hard to fathom as I have never felt a compulsion to message someone who doesn’t appeal just to tell them why.  (It has been suggested that men do this to women they feel are out of their league, but that's cold comfort for enduring the insults.) 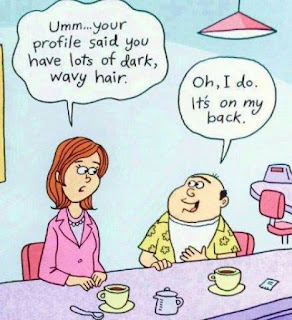 10) Men who think I should feel blessed by their attention.  They usually say something to the effect that at 48 I must be thrilled to get any response.  They seem to assume they are the only one messaging me and expect me to fuck them in gratitude.  This category overlaps with one for men who tell me that I will never find what I am looking for so I should instead take what they are offering.  The married men and the men looking for hook-ups say that as a follow-up.  If I say, “not interested, looking for a relationship” they respond that, at 48, I should be grateful anyone wants to fuck me.  They disguise it as a compliment, “Wow, are you really 48?  You look amazing!  Maybe we could hook up?”  Their profile will list an age range of something like 20-35.  They don’t want to date me but deem me still attractive enough for a hook-up.  I can’t resist mentioning that these guys are usually ugly.  I get married Danny DeVito lookalikes who somehow imagine that I'd be eager to be a piece on the side for them.  The hubris that enables them to believe that any woman would want to fuck them must be staggering.  Is it the same mentality that leads repulsive monsters like Weinstein and Trump to believe that there is any woman on earth who wouldn’t be nauseated at the very idea of them?

11) Men who are looking for a rich woman to support them.  Yes, this happens a lot; it’s not all the other way around.

12) Men who friend-zone me because of my age, usually apologising that they are looking to date someone younger but that we both like horses or opera or Byatt or whatever so perhaps we can be friends.  I am happy to make new friends but could do without the preemptive age-related rejection leading into it.

13) Subs who want me to tie them up and humiliate them.  This dating site isn’t FetLife and I am not a pro domme, although it might be more lucrative than adjuncting.

14) The outliers: I’ve gotten the odd message from couples looking for a threesome, men in open relationships, and men who live abroad but travel to the U.S. on business looking for stateside pussy, etc.  What all the outliers have in common with the other categories is that they haven’t read my profile.  I have filled out every section, ticked every box that specifies serious, long-term relationship only.  Almost no-one who messages me is looking for that.  Of those that are, they have huge deal breakers:  they don’t want children, they’re Republicans, they smoke, etc.  I am overwhelmed with messages and I answer less than one out of 50.

Why don’t I just message men instead?  Because there aren’t any men whose age range goes up to 48.  60-year-olds list 25-45.  The only guys who have an open-ended age range are just looking for hook-ups.  The serious blokes are looking for someone younger even if they are my father’s age.  Yeah, yeah, I can’t blame them; it’s a biological imperative.  But that doesn’t mean it can’t piss me off and frustrate me.

Another thing that pissed me off this week:  The site has a rule that all photos must include your face.  No body-only shots, no pets, no inanimate objects, etc.  Most guys have multiple photos that violate this rule—their dog, a sunset, their six-pack, etc.  I have 7 clear face shots, more than most people, and I added in a photo of some ice cream, just for fun, with the joking caption that you have to compete with this.  Well, someone reported it and they removed it.  WTF kind of petty bullshit is that?  Why did this bother someone enough to report it?  I could report pretty much every guy’s profile for photo violations in retaliation.

Most of the messages I get are so daft or disgusting or show the asshole didn’t so much as glance at my profile, that I am getting both fed up and creeped out.  I am there for ONE purpose only: To have children.  I am not interested in hooking up.  I am not interested in dating.  I am not interested in a relationship.  (Am I not ever horny? Yes, unbearably so, constantly, but getting laid is not worth living with some narcissistic jackass.)  Above all, I am no longer interested in them.  They are a means to an end, nothing more–just as they are not interested in me as a person based on my profile but only as an object based on my photo.  Turnabout is fair play, dickheads.  I can’t afford a sperm donor nor can I afford to go abroad for IVF (no U.S. IVF clinic will take someone at 48 who refuses to use donor eggs because no-one has ever yet conceived via IVF with their own eggs at 48. The Guinness World Record is 46.) so I am looking for someone with the money to drop on IVF who wants kids right away.  That’s it!  I think the rest are all scary, egotistical douchebags & women should run a mile from them.

Now, is this bitter misandrist screed (which I appended to my profile and will probably delete in a week or two) going to reduce the number of messages I get?  No, because no-one reads my profile. 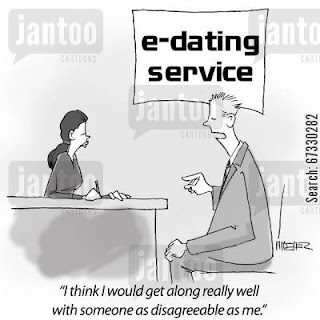 Posted by Piranha Chicken at 23:42