Some people run to win, some run to live, some do it out of masochism, some genuinely love it, others just want to build cardiovascular fitness to play their sport of choice.  Most are trying to outrun Father Time. 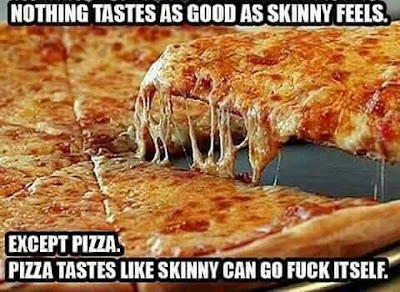 I love to bake.  I prefer to bake for other people but I have been known to, um, taste things I've baked.  I love wine, and cider.  I love Mexican food, as well as Indian, Thai, Greek, Italian, and pretty much the entire UN of food options.  I love chocolate and pizza a little too much to have ever found out if skinny feels better than they taste.  And I love ice cream just slightly more than life itself.

In the horse world, we call horses that seem to get fat on air "easy keepers".  You have to feed them a fraction of what a typical horse of their size and workload would need to prevent them from resembling a real-life Thelwell pony.  Alas, I'm an easy keeper, too.  I can maintain my weight on far fewer calories than is typical for someone of my age, size, and activity level.  I have to exercise tremendous restraint in order to be able to fit through doorways.  No exercise burns as many calories as running.  It also suits my solitary nature. 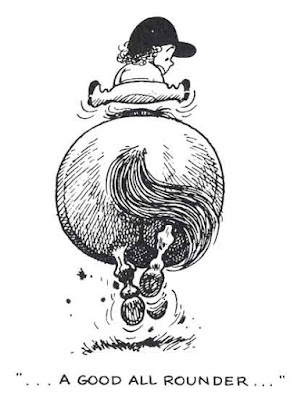 So, if I don't run, I can't eat, and that's no fun.  I took a long break from running when I was depressed and unhappy with my life, career, and relationship.  Alas, I did not take a commensurate break from eating, and I am paying for that still.  I have lost over half of the weight I gained but I still have many miles to go to run off the remainder (which I wish could be done without losing the boobs, but that's a rant for another post).

Goal-oriented by nature, I entered the lottery for the NYC Marathon when I began running again, and I commenced a more ambitious training program than I had undertaken when I ran it in 2002.  But my back decided to thwart my plans, and I have completed less than a quarter of it.

I'd signed up for a few halfs as part of marathon training.  I wrote about the Kingdom Run in August, which remains my favourite race despite the fact that I always finish last.  Today was the inaugural Happy Valley Half-Marathon, created by the owner of my local gym, where I have been attending at least six classes per week, along with yoga, cycling, and working at the barn, to augment my running.

I knew that, being 14 years older and 40 lbs. heavier than the last time I ran a marathon, getting back up to my usual snail's pace would be a challenge.   Nonetheless, my stubborn goal for the marathon remains to beat my previous time of 5 hours.  Unfortunately, nothing in my training indicates it is realistic to expect to finish in less than 6 ½.  I am not built for speed, but such an abysmally slow time would not even count as a finish for me, no celebration and no reward deserved.

Pace has been much more of a problem for me than endurance, so I have focused my training on improving my average pace per mile, but with my training having ground to a halt over the summer due to my back, I haven't made much progress.  My Kingdom Run time was 3:01; my goal today was to beat 2:30.  I failed.  My time was 2:44.  I wasn't quite dead last but I was finisher 349 out of 358.  The winner, 21, male, finished in 1:23, and the first female finisher, also 21, finished 9th in 1:32.  Now that's a time I wouldn't be embarrassed to post.  The August race was run entirely in the rain, which was unpleasant but is unlikely to have slowed me down any.  The rain of the last two days abated before today's race, thank goodness, but it was replaced by a bitter cold wind.  The course was covered in wet leaves.  I ran gingerly and was fine – my running shoes are worn through and have no tread, so I have to be careful no matter the conditions (no, I am not an idiot – I had planned to replace them before the marathon but finances did not permit) -- but I saw a number of people slip and fall.  I wore a scarf over my face but I have cold-activated asthma and breathing was absolute misery from start to finish.  I do enjoy running immensely, and I never once felt tempted to walk during the Kingdom Run.  I hadn't a single sore muscle during or after the race, and I finished feeling like I could have turned around and ran it again.  Today I had to fight for every step.  I didn't walk – that is an unbreakable rule of racing; I don't think you belong on the course if you have to walk – but I wanted to.  My quads hurt the entire time, which has never happened before, and there was never, until the last mile, a moment when I thought, "I've got this".  There certainly wasn't a millisecond when I thought, "I can easily run twice as far in two weeks".  I pushed myself through the entire race, freezing and completely miserable, without enjoying a single stride.

It also seemed weirdly long.  The first mile marker sign I saw was mile 5, and I was feeling like it should have been at least 10 at that point.  Each mile after that felt like four on a normal run.  I was expecting RunKeeper to show me that the course had been marked inaccurately and I'd really run two-three times as far, but it only said 13.4 when I crossed the finish line, a negligible difference.

After the August race, I drove back to the lovely guesthouse where I was staying, showered, and went back into town for lunch.  I never at any point felt even slightly sore or tired that day.  Today I showered and went for my usual Sunday brunch at a local café, which revived me slightly, but I still needed a nap, and I am not a napper.  I was ambivalent about going to a concert tonight but decided that I might as well go because nothing productive was going to get done today.  Tomorrow, I'll do an easy 6 miles and see how it feels.  I should not be the tiniest bit fatigued or sore from a half at this point.  The brutal weather is one obvious culprit.  I stood breathing the steam from the shower for a half-hour before my lungs stopped feeling as if they were on fire.  What I really need is to go to the hot tub place.  That would sort me right out.  That was a local haven I lost access to when City Boy left, as they have a two-person minimum.  It pisses me off – they could just use cameras to make sure solo bathers don't drown.  Ok, I am kidding about the cameras, but I do think the policy is unnecessary – I would happily give them my first born to be able to go there.

Besides the weather, another difference between the races may be mental energy.  At the August race, I had just seen Silas and was a blissful week free from a job I hated.  I had hot summer days of freedom to look forward to and a little money to live on until I found a new job.  Now, money's run out, haven't seen Silas in nearly 3 months, and I have to continually tamp down the fear of not getting a job when it's almost November and I haven't yet paid my October bills.  I know I will get one eventually, it's just getting hard to stave off both creditors and panic.  That may be draining some of my running energy.

Thanks to the two solid days of rain, my back had a break from running and felt better than usual before this race.  I have started clenching my hands and jaw tightly when I run, bad habits that waste energy.  I try to stop when I notice but it's an unconscious reaction to coping with the back thing.  Luckily today I got until about mile 4 before it started to seriously impede me, and it wasn't until I had stopped and milled around after the finish and started to walk to my car that it completely seized up. I am still not sure how I got to my car.  I am hoping that it will at worst do the same thing on marathon day: hold off on being completely debilitating until after I cross the finish line -- in, I hope, less than 5 hours.
Posted by Piranha Chicken at 22:11