“I like to pay taxes. With them, I buy civilization.”- Oliver Wendell Holmes Jr. 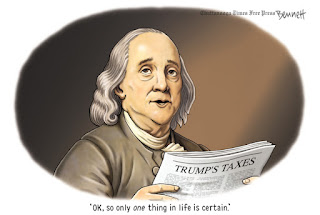 Trump hasn’t released his tax returns because he doesn’t want to reveal that he isn’t as wealthy as he claims to be.  He also wanted to hide the fact that he pays little or no taxes due to the deductions he claims for business losses.  Thanks to this New York Times piece, that came out anyway.

He shouldn’t have worried.  The reaction, from many on the left as well as, predictably, on the right, has been some version of well, don’t we all try to take every deduction we can legally get away with?  As long as he didn’t break the law, he is doing the same thing we all do, just on a larger scale.  Even people who grasp why taxes are necessary try to pay as little as possible on an individual basis.

Trump's supporters, and even some of his detractors, see his tax status as aspirational:  They’d like to make as much as Trump can lose each year and still afford his gold-plated lifestyle.  It’s easy to see how the idea that someone who has spent his life gaming the system is a better person to reform it than someone who has been part of it is superficially appealing to voters.  What’s baffling is that they are gullible enough to believe he would want to reform it.  It’s ironic that Hillary Clinton, who came from a modest background and has spent much of her career working on policies for children and families, is dismissed as being in the pockets of the wealthy yet born-with-a-gold-plated-spoon-in-his-mouth billionaire Trump is convincing poor people that he is on their side and will promulgate policies to help them.

One source of that delusion is easy to see: Because Clinton has spent her life in public service, she is intimately aware of how difficult it is to implement change, and she refuses to make sweeping, unrealistic promises on which she knows she cannot deliver.  That experienced, sensible, moderate approach fails to turn voters on.  They want to be promised the moon with whipped cream and a cherry on top, and a side of tax cuts.  Trump is happy to make glib promises he has neither the ability nor the intention to fulfill.  He’s discovered that on the campaign trail it’s enough to tell people what they want to hear, it need be neither realistic nor truthful.  And being bombastic rather than measured scores him unearned points for honesty as audiences mistake his boastful lies for off-the-cuff authenticity and misread Clinton’s careful policy study, experience, and preparation as being fake and scripted.

Trump’s tax returns are not the most striking evidence of his lack of fitness for the presidency.  No matter how far to the left you are, it’s tough to make a case that someone who has (as it appears thus far) broken no tax laws should have voluntarily paid more in taxes in the name of civic virtue.  That’s pretty much a non-starter across the political spectrum.  A stronger argument may be found in the fact that his business losses were huge and repeated.  Most businesses fail, and investors and entrepreneurs hope to have a few profitable ones to make up for the many failures.  Times change as well:  If your factory makes buggy whips it’s going to fail when automobiles replace horses for transport no matter how savvy a businessman you may be.  But it’s undeniable that Trump’s business losses show a pattern of self-indulgence, bad instincts, and ineptitude that on its own, in the absence of any other negative qualities (as if!), would preclude him from the job of president.  Not to mention that his bankruptcies left shareholders and contractors unpaid -- those contractors being the blue collar workers who misapprehend that Trump is going to help them.  The left would do better to spin his tax record that way, highlighting the abysmal business sense those losses reveal, than to dwell on ethics and a civic virtue that do not seem to be required characteristics for the role.

Oh, right: The Veep contenders debated.  I guess I'd better say something about that, although Stephen Colbert summed it up best when he said, "It was like watching a loaf of white bread get pistol-whipped by a jar of mayonnaise.  Not a lot of flavour, but there was a clear winner."  Kaine's intro was poor.  He could have said "right hand man" instead of "person" because he is, in fact, a man, albeit a pretty milquetoast one who fails at appearing presidential.  He sounded condescending when he said how proud he is of Clinton -- she's not his daughter getting a middle school award.

Not sure how Pence survived the "retiring" of the replicants in Blade Runner, but he's particularly inept at passing for human.  But his job last night was to reassure people that there would be an adult in the room if Trump were elected, and in a triumph of style over substance, he delivered.  Remember, Pence was picked to be Trump's running mate because he's a bog-standard conservative Xtian, who has a demonstrable track record of toeing the party line on social issues like abortion and gay rights.  Trump's attempts to pass himself off as a conservative Xtian in the primaries were so feeble that even Evangelicals gullible enough to believe Earth is 10,000 years old didn't buy it.  That demographic usually votes Rethug but might sit this one out if they couldn't stomach voting for their party's nominee.  Hence, Pence.

Speaking of humans, Kaine did his best to humanize Clinton but it was a weak effort.  He wasted many of his answers insulting Trump instead of building up Clinton.  He was the first to interrupt, and kept at it.  I thought we had learned that's always a turn off to voters.  The debate went off the rails 10 minutes in due to both candidates deflecting from answering questions to insulting their opponent.  Pence is no more honest than Trump but he's a much slicker liar.  That worked for him in that he wiped the floor with Kaine; it may work against him in that he comes across as the typical politician he is, which many demographics, including Trump's supporters, distrust.

I never liked Kaine – he reminds me of a B actor in a sitcom -  & he reinforced that negative impression in this debate.  He didn't deflect any of the bullshit that Pence flung, leaving the impression it was all true.  He looked uncomfortable and scripted, well out of his depth.  Pence, albeit lying every word, was a much better debater.  His line "at the risk of agreeing with you", making him sound conciliatingly bipartisan, was a cleverly calculated counterweight to the GOP's image.  Pence was there to be reassuring and he delivered with his tone of voice alone.  The only point Kaine scored was on race because even Pence could not defend Trump's verbal diarrhea on that issue.  Pence's one misstep was bringing up the Clinton Foundation as that meant the entirely fraudulent Trump Foundation would be raked over the coals in retaliation.

The moderator is going to be accused of a pro-Democrat bias, as Lester Holt was, and with an equally complete lack of justification.  The reason she appeared to press Pence more than Kaine was only due to his blatant evasion of the questions.  She would have pressed Kaine had he been as evasive, and she did try to shut down his interruptions.  Pence did not try to deny most of the nutty things Kaine quoted Trump as having said.  He shook his head and muttered but he did not attempt to defend Trump, except for quipping "he's not a polished politician like you and Hillary Clinton" (and Pence himself).  For the most part, he used the air time to fabricate an image of reasonableness and sanity.  That was the smart choice as he could only look idiotic claiming Trump did not say things that it is easy to prove he said.  Both Kaine and Pence scored poorly on the Truth-o-Meter.  Considering that technology enables the instantaneous fact-checking of every word a candidate speaks, I wonder if we will eventually see their mouths catch up with the times and some of the hyperbole stop. 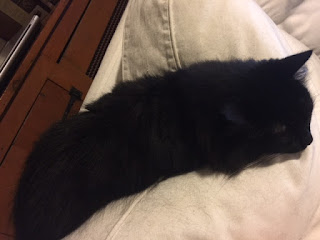 Pence's lack of substance was as pathetic as Trump's but his delivery was very polished.  Kaine didn't get as hard a time from the moderator, which the alt-right will make a meal of tomorrow, but there was less evasion and lack of substance in his answers for her to push back against.  So, I dunno if you can say that someone who lied the whole time "won" but Pence certainly trumped Kaine to an uncritical audience that was more focused on style than substance.

Finally, everyone should watch the debates with a cat next to them on the sofa.  Their total lack of interest in either candidate is endlessly entertaining.

Posted by Piranha Chicken at 23:18