I have remained friends with a former colleague who is a fundamentalist Christian.  We simply agree to disagree about, well, pretty much everything.  I have a morbid fascination with his bizarre beliefs because they are so irrational that it simply beggars the imagination how he could have attended an Ivy League school and yet hold to some of his nuttier views.  His father is a prominent Creationist so, despite his education, he believes the earth is 6,000 years old.  One time he came over for dinner and lamented, in all earnestness and with genuine sadness in his voice, that I and my then boyfriend were such nice people that it pained him that we would be going to hell for all eternity because we were living in sin.  He also explained that he and his then fiancee had only ever hugged and kissed on the cheek because anything more, such as a kiss on the lips, would be "defrauding".  I got the whole scoop on this fun fundie concept from him:  The deal is that, in their view, the only legitimate expression of sexuality is within marriage, so looking at attractive people or engaging in any activity that might lead to sexual arousal is "defrauding" because it cannot lead at that time to its natural conclusion, i.e., sex within marriage.  This, of course, means that masturbation is an absolute no-no.  My Fundie Friend made the critical error of vouchsafing that, although he was not perfect in resisting, despite much prayer, he had gone nine whole months without succumbing.

Well, you can guess what happened next.  Every time I saw him, I'd ask, "Still holding out?"  "How about now?"  I thought this was hilarious.  Still do.  But I am sure he regretted letting that slip even though he knew my teasing was all in good fun.

The thing is, he and his fiancee split up and he remains unmarried in his 40s.  According to the tenets of his religion, if he never marries, then he is expected to never have sex in his entire life.  Not only to die a virgin, but to never even have an orgasm.  I doubt anyone actually follows these rules for life but imagine how pathetic it would be if someone did really deny himself any form of sexual pleasure for his entire life in a misguided quest to avoid going to a fictional hell.  Their only orgasms would be from wet dreams in their adolescence—the one form of sexual release that even the fundamentalists must accept is beyond the individual's control.  Scary and sad, isn't it?  This is the only life we get, and you only live once.  There are no do-overs if you miss out on life experiences.  Everyone has to decide what is important to them, what fits their values, but allowing superstition to deprive you is such a waste. 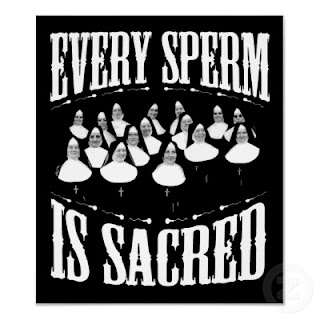 Another frightening point he made was saying to me that he didn't understand how I could be such a moral person, have such strong ethics, without religion.  In his view, all morality, all sense of right and wrong, comes from his god.  He said that without this external moral compass guiding him, he could go crazy and rape and murder and steal, what would stop him doing whatever he felt like doing?  What he doesn't get, of course, is that morality precedes religion.  Since humans wrote the holy books of all the world's religions, with their prescriptions for good and bad behaviour, humans must have already had those concepts prior to developing and codifying various religions.  But since he believes the Christian Bible was divinely inspired, he doesn't believe that right and wrong existed in human consciousness before being revealed by his god.  The belief that religious people hold that they would lack a moral compass without their religion is one of the most frightening aspects of religious belief.

His religion also forbids the consumption of alcohol.  It does allow birth control, although it cannot be abortifacient.  He does think for himself in a few respects, which is his redeeming feature and why we can remain friends.  He surprised me one time by stating bitterly that he wished other abortion opponents would be a bit more concerned with babies after they are born.  More recently, when his boss, Pat Robertson, stated that it was ok for spouses to divorce if one contracts Alzheimer's, my Fundie Friend spoke out vehemently in disagreement, maintaining that his Bible says marriage is for life, in sickness and in health, no exceptions.  He is not the only Evangelical to distance himself from that particular Robertson pronouncement, but the guy is actually his boss.

Through observing my Fundie Friend, I also learned something about the power of community and socialization in preserving religion.  I would be willing to bet any amount of money that, if he became an atheist, if he stopped believing in every last bit of that superstitious drivel, he would never admit it, perhaps not even to himself, but certainly not publicly.  Think about it:  His entire family is fundie, and his family life is extremely important to him.  He has a large, close knit family that he sees as often as he can.  Why would he mess that up?  He has no family of his own.  He is also gainfully employed in a secure job, which he would lose if he failed to tow the party line in any respect, ex cathedra statements from Robertson notwithstanding.  And how would he even be exposed to other ideas in that milieu?  But the strongest hold is not even from his family or his job, but from the sense of community he gets from being part of a relatively homogeneous group.  He has moved around a lot, both domestically and internationally, and he told me that, wherever he goes, all he has to do is find the Evangelicals and he is instantly welcomed, immediately at home, enveloped in the warmth of a like-minded community.  What, to him, could be worth losing that?  When I think of the pernicious influence of religion, how I want its sexism and control to be eradicated in the world, I always remember that people crave boundaries, rules to live by, and community.  If people are to stop believing in superstition, those needs must be met in some other way.  Even as a hardcore atheist, I appreciate the role that churches can play in creating a sense of community in an increasingly atomised world.  The Anglican church is the only church for any good atheist to belong to.  You have the bells and smells, the "thee's" and "thy's", all of the pomp, circumstance and ritual that you could desire, but no-one is expected to believe anything.  I grew up singing in an Episcopal church choir and I am quite certain that our rectors were atheists, along with about three quarters of the congregation.  Lack of belief wasn't an impediment to becoming an Episcopal priest, or being active in the church.  We had great fun, and community.  I particularly loved the hand bell choir, and Xmas caroling.

But I digress.  My point in mentioning my Fundie Friend is that he asked me a provocative question on Facebook the other day and I will answer it here tomorrow.

Posted by Piranha Chicken at 18:58