Beginning with the first asparagus of spring and ending with pumpkins and wreaths, my neighbourhood boasts miniature farm stands in front of many houses.  Some are as small as a bucket on a chair, some as fancy as large wooden carts with shelves and an awning.  They all have two features in common: 1) What is being sold was grown in their own garden and 2) There is a small box with a slit in the top to insert your money, next to a hand-lettered sign listing prices.

When I first moved here, I was shocked that anyone would leave a box of money unattended all day.  As a city person, I am used to keeping a close eye on all of my possessions, especially my wallet, and knowing that anything you turn your back on will disappear before you can blink.  In fact, the way to get rid of anything you don't want in the city is to put it outside on the street.  It will be gone the next day, whether it is as small as an ugly coffee mug or as large as a sofa.  Locking doors and windows is second nature, and it's only half the job with your car, for which you need to remove the radio (and arial, if it is the detachable sort), hide anything of value that is visible in the interior, club the steering wheel, and push in the wing mirror so it doesn't get sideswiped off.

When I moved to my current abode, the landlady did not give me a key to the front door.  I had to press her on this point and she seemed to think it an unnecessary bother for her to find one for me.  No-one around her, she said, ever locks their doors.  When I was searching for my first car (a luxury I never had in the city), I answered a local ad on Craig's List and the shocked and bewildered owner of the car told me that it no longer had a radio because someone had stolen it the night before.  I asked him why he hadn't locked the car and he said that no-one around here ever did.

That experience proves, of course, that theft does occur in the country.  The next town over is a college town with a very high rate of home invasion in off-campus housing, with electronics the most stolen item.  There are also items in the local police blotter each week of cars broken into at the shopping mall when valuables are left visible on the seats.  Yet, despite these crimes, the general attitude around here is much more cavalier than in the city.  I would never leave my house or car unlocked—I am a paranoid city person at heart—but the sight of the honour boxes does somewhat restore my tarnished faith in humanity.

Below is a photo of flowers that I bought from a little red wagon parked in a driveway down the street. I put my $4 in the honour box and chose this bouquet.  Not only is it cheaper and fresher than one from the store but it is more environmentally responsible.  The flowers were not flown in from a distant nursery; they were grown right here on the block, and lovingly arranged by the grower.  They are inexpensive as there is no packaging, transport cost, or middleman.  They currently grace the sideboard in my dining room and cheer me up each time I see them. 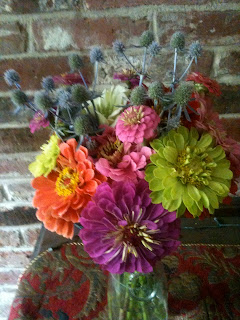 Posted by Piranha Chicken at 18:59