Smorgasboard of the Past

Yesterday I wrote about the lure of vintage living in the modern world and the dangers of women retreating from the workforce to become retro-style housewives.  Yet, it is obvious that our current lifestyle, dominated by convenience rather than community, is taking its toll on our health and well-being.  Women of all socio-economic classes are finding that they are still, half a century after the women's rights movement, having to choose between having a career and a family and men are still oblivious to that problem.  What is the solution?  It is not for women to simply tie their aprons back on and retreat from public life.  There has to be a way to get to the root of what we are nostalgic for yet avoid the rigidity, conformity, sexism, racism, and other ills of that era. 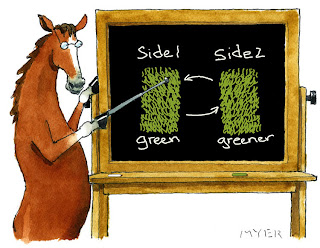 At university, City Boy was a member of an organization called the Society for Creative Anachronism. Their motto was, "the Middle Ages as it ought to have been".  The members were nostalgic for the aesthetics of the mediaeval period, but could do without the plagues, mediaeval medical care, mediaeval sanitation, the lack of socio-economic mobility, the theocratic oppression, and the body lice (although City Boy noted that many SCAers seemed to adopt mediaeval hygiene, so I am not certain about that last one).  At SCA events, members could step out of the modern world, put on their mediaeval garb, accent, personae, and rose-coloured glasses, and experience some semblance of a heavily romanticized and idealized age.

If we want to dispense with what is not working for us in the present and reclaim what we long for about the past, we need to adopt a similar custom of picking and choosing.  We would not want to return to that era in its entirety.  There was a lot of misery in the 50s.  The appeal to young women today of becoming a housewife lies in the fact that it is a choice.  Real post-war women lacked that choice.  Plenty were depressed and anxious and were the first consumers of modern prescription mood-altering drugs.  Women were stuck in marriages with abusive or cheating husbands because they would be financially destitute if they left.  It was women's discontentment with their circumscribed lives in the 50s that fueled the women's rights movement of the 60s.

So, what we need to do now is list what we long for about the past and figure out how to bring it back in the present, without the bad stuff tagging along.